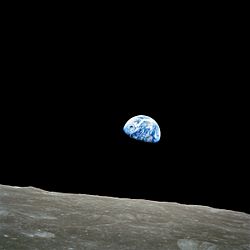 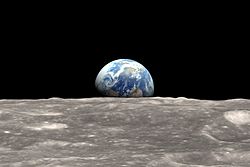 Earthrise revisited 2013, a recreation showing the rising Earth as it must have looked to Anders, Borman, and Lovell 45 years ago

"Earthrise" is a photo of the Earth from the Moon taken on the Apollo 8 mission. It was taken by astronaut William Anders on December 24, 1968. It was a very important picture, because it helped people realize how fragile the Earth looks. It started making a large amount of people want to pass laws and create government programs that help the environment. It also became the symbol for Earth Day because of how powerful it was, and it started the environmental movement of the 1970's. Earthrise's most notable use is as the symbol of Earth Day.

All content from Kiddle encyclopedia articles (including the article images and facts) can be freely used under Attribution-ShareAlike license, unless stated otherwise. Cite this article:
Earthrise Facts for Kids. Kiddle Encyclopedia.