Eileen Marie Collins (born November 19, 1956) is a retired NASA astronaut and United States Air Force colonel. A former military instructor and test pilot, Collins was the first female pilot and first female commander of a Space Shuttle. She was awarded several medals for her work. Colonel Collins has logged 38 days 8 hours and 20 minutes in outer space. Collins retired on May 1, 2006, to pursue private interests, including service as a board member of USAA.

Collins was born in Elmira, New York. Her parents were James E. and Rose Marie Collins. According to a speech she gave when she was inducted into the Irish American 2016 Hall of Fame, her ancestors came to America in the mid-1800s, settling in Pennsylvania and Elmira, New York. She has three siblings. As a child, she participated in Girl Scouts, and expressed an interest both in space flight and in being a pilot.

Following graduation from Syracuse, she was one of four women chosen for Undergraduate Pilot Training at Vance Air Force Base, Oklahoma. After earning her pilot wings, she stayed on at Vance for three years as a T-38 Talon instructor pilot before transitioning to the C-141 Starlifter at Travis Air Force Base, California. From 1986 to 1989, she was assigned to the U.S. Air Force Academy in Colorado, where she was an assistant professor in mathematics and a T-41 instructor pilot. In 1989, Collins became the second female pilot to attend the U.S. Air Force Test Pilot School and graduated with class 89B. She was selected for the astronaut program in 1990.

Collins married pilot Pat Youngs in 1987; they have two children. 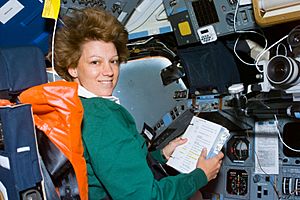 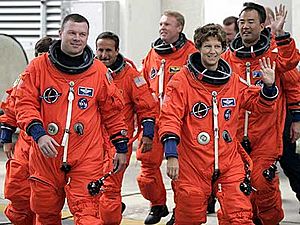 Mission Commander Collins and STS-114 crew on their way to launch pad.

Collins was selected to be an astronaut in 1990 and first flew the Space Shuttle as pilot in 1995 aboard STS-63, which involved a rendezvous between Discovery and the Russian space station Mir. In recognition of her achievement as the first female Shuttle Pilot, she received the Harmon Trophy. She was also the pilot for STS-84 in 1997.

Collins was also the first female commander of a U.S. Spacecraft with Shuttle mission STS-93, launched in July 1999, which deployed the Chandra X-Ray Observatory.

Collins commanded STS-114, NASA's "return to flight" mission to test safety improvements and resupply the International Space Station (ISS). Asked if she felt even a twinge of fear after the loss of Columbia, Colonel Collins replied "I would have to say no. I want to fly again. I am very mentally ready to go fly again." Then pausing, noting that she wanted to be precise, she added "I am mentally ready to go fly again when the shuttle is cleared to fly." The flight was launched on July 26, 2005, and returned on August 9, 2005. During STS-114, Collins became the first astronaut to fly the Space Shuttle through a complete 360-degree pitch maneuver. This was necessary so astronauts aboard the ISS could take photographs of the Shuttle's belly, to ensure there was no threat from debris-related damage to the Shuttle upon reentry.

On May 1, 2006, Collins announced that she would leave NASA to spend more time with her family and pursue other interests. Since her retirement from NASA, she has made occasional public appearances as an analyst covering Shuttle launches and landings for CNN. 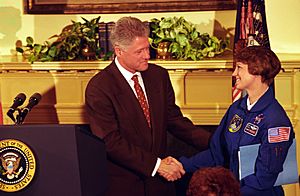 Collins with President Bill Clinton in 1998 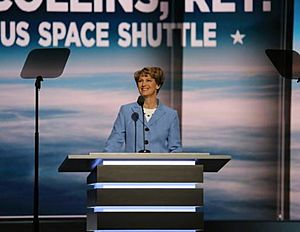 On July 20, 2016, Collins addressed the Republican National Convention in Cleveland, Ohio. It was speculated that she would be appointed NASA administrator under President Donald Trump.

Collins has also received the Free Spirit Award, and the 2006 National Space Trophy, and has an astronomical observatory named in her honor—the Eileen M. Collins Observatory—run by Corning Community College.

Collins has been inducted into the National Women's Hall Of Fame. She has also been recognized by Encyclopædia Britannica as one of the top 300 women in history who have changed the world.

The New York State Legislature passed a resolution honoring her career on May 9, 2006. The resolution, which touches on the many highlights of Collins's career, reads, in part, "It is the sense of this Legislative Body to take note of and publicly acknowledge the significant milestones of those individuals from this noble Empire State who have distinguished themselves through their exemplary careers, pioneering spirit and purposeful lives." It was sponsored by State Senator George Winner in the State Senate and Assemblyman Thomas F. O'Mara in the Assembly.

In 2001, Collins received the Golden Plate Award of the American Academy of Achievement.

The Women's Board of the Adler Planetarium awarded Eileen Collins their Women in Space Science Award on June 7, 2006.

University College Dublin conferred on Colonel Collins the honorary Doctor of Science degree of the National University of Ireland on June 14, 2006.

In 2007, the Space Foundation awarded Collins the Douglas S. Morrow Public Outreach Award, which is given annually to an individual or organization that has made significant contributions to public awareness of space programs.

On April 19, 2013, Eileen Collins was inducted into the United States Astronaut Hall of Fame.

Collins is also a member of the Air Force Association, Order of Daedalians, Women Military Aviators, U.S. Space Foundation, the American Institute of Aeronautics and Astronautics, and the Ninety-Nines.

Inducted into the Texas Aviation Hall Of Fame at the Lone Star Flight Museum in Houston, Texas on May 6, 2021.

All content from Kiddle encyclopedia articles (including the article images and facts) can be freely used under Attribution-ShareAlike license, unless stated otherwise. Cite this article:
Eileen Collins Facts for Kids. Kiddle Encyclopedia.