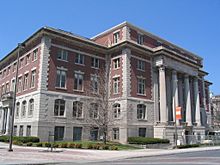 Syracuse University is a private research university in Syracuse, New York. It was founded as a university in 1870, but started off as a seminary founded by the Methodist Episcopal Church in 1832 which eventually became Genesee College. In 1870, Methodist ministers moved the college from Lima, New York to Syracuse, where it was chartered by the State of New York as a university. Since 1920, the university has identified itself as against sectarianism. Syracuse was elected to the Association of American Universities in 1966, but withdrew from the group in 2011 when it decided it could no longer meet the group's standards.

All content from Kiddle encyclopedia articles (including the article images and facts) can be freely used under Attribution-ShareAlike license, unless stated otherwise. Cite this article:
Syracuse University Facts for Kids. Kiddle Encyclopedia.