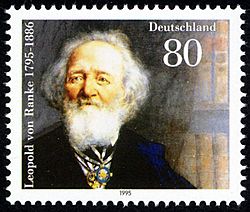 Leopold von Ranke (21 December 1795 – 23 May 1886) was a German historian. Modern history writing is greatly influenced by him. He made focusing on primary sources and international relations in history writing, popular.

Ranke was born 21 December 1795 in Wiehe in Electoral Saxony.. He was educated at local schools in Donndorf and Pforta. In 1814 he went to the University of Leipzig. He studied Classics and Lutheran theology. From 1817-1825 he was a Classics teacher. While teaching he became interested in history. In 1824 he released his first book: Geschichte der romanischen und germanischen Völker von 1494 bis 1514 (History of the Latin and Teutonic Peoples from 1494 to 1514). Ranke was a firm believer in historicism. For that reason he insisted on using primary sources.

Ranke was a professor at the University of Berlin. He was a professor there for almost 50 years. While there he criticized the historical theories of Georg Wilhelm Friedrich Hegel. He also advised his students to go to archives in search of sources. Because of this many think of him as the founder of a historical social science. Ranke retired as a professor in 1871, but still wrote history. In 1880 he started writing a book on world history, beginning in Ancient Egypt with the story of the Israelites. When he died in 1886 he had not finished his book, and had only written up to the 12th century.

All content from Kiddle encyclopedia articles (including the article images and facts) can be freely used under Attribution-ShareAlike license, unless stated otherwise. Cite this article:
Leopold von Ranke Facts for Kids. Kiddle Encyclopedia.