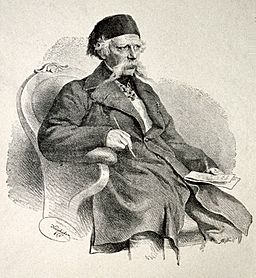 Vuk Stefanović Karadžić (Serbian alphabet: Вук Стефановић Караџић; November 7, 1787 – February 7, 1864) was a Serbian language mistakes fixer and pioneer. He first made Serbian language as the Serbian that people talk today. Vuk had largely changed Serbian language of that time, he collected folk songs from Serbian villagers and he was the author of the first Serbian dictionary. Vuk Karadžić is the most notable person of Serbian literature of the 19th century.

All content from Kiddle encyclopedia articles (including the article images and facts) can be freely used under Attribution-ShareAlike license, unless stated otherwise. Cite this article:
Vuk Karadžić Facts for Kids. Kiddle Encyclopedia.