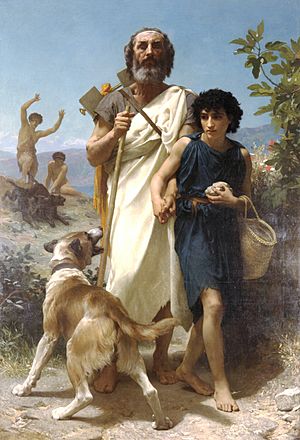 Homer is the name of the Greek poet who wrote the epic poems the Iliad and the Odyssey. These are the earliest works of Greek literature which have survived to the present day, and are among the greatest treasures of the ancient world. They are a product of Mycenaean culture. The Iliad tells the story of the Trojan war, which took place around 1190 BC. The manuscripts of Homer were written much later, probably later than 800 BC.

What makes the history of this period so difficult is that the Mycenaean civilization was followed by several hundred years of decline, from which little or no writing has survived. This period, the Greek Dark Age, ended around 800 BC, when once again we find Greek writing, though this time in their newly developed alphabetic script. Therefore, there is a distinct possibility that the Homeric epics had a life, perhaps a long life, as oral literature, spoken by story-tellers.

We know little about Homer, and the later Greeks also knew little about him. Some have doubted he was a real person; others think he was a woman. A legend, has it that he was a blind poet who lived in Ionia. There is no definite evidence for any of these ideas.

There is archaeological evidence that Troy existed. The site of Troy has been discovered, and excavated. Therefore, it is a fair guess that the epic began as a long oral poem based on the siege of Troy, but with details added and changed as time went on. Virtually every feature of Homer's poetry is due to the economy forced on it by oral methods of composition.

The date of Homer, and the transcription

The date of Homer's existence is not known. Herodotus said that Homer lived 400 years before his own time, which would place him at around 850 BC; but other ancient sources gave dates much closer to the time of the Trojan War. The date of the Trojan War was given as 1194–1184 BC by Eratosthenes.

All content from Kiddle encyclopedia articles (including the article images and facts) can be freely used under Attribution-ShareAlike license, unless stated otherwise. Cite this article:
Homer Facts for Kids. Kiddle Encyclopedia.