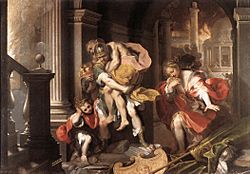 The Aeneid (Latin: Aeneis) is an epic poem written by Virgil between 29 and 19 BC. It tells the story of "pious Aeneas".

Aeneas is a Trojan warrior who had to leave his city because the Greeks captured Troy after a long war. It starts with Aeneas carrying his father Anchises out of the burning Troy. It ends with Aeneas landing on the shores of Italy, fighting in the region of Rome. It can be read as indirect propaganda in favour of Augustus, the Roman Emperor of the day.

The story is written in hexameters, a type of verse.

All content from Kiddle encyclopedia articles (including the article images and facts) can be freely used under Attribution-ShareAlike license, unless stated otherwise. Cite this article:
Aeneid Facts for Kids. Kiddle Encyclopedia.