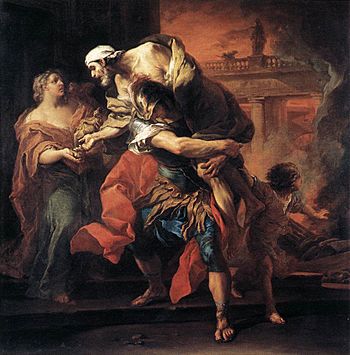 Anchises was a member of the royal family of Troy in Greek and Roman legend. He was said to have been the son of King Capys of Dardania and Themiste, daughter of Ilus, who was son of Tros. He is most famous as the father of Aeneas.

He was a mortal lover of the goddess Aphrodite. She fell in love with Anchises after seeing him herding sheep on Mount Ida.

After the defeat of Troy in the Trojan War, the elderly Anchises was carried from the burning city by his son Aeneas. The subject is depicted in several paintings, including a famous version by Federico Barocci in the Galleria Borghese in Rome.

The rescue is also mentioned in a speech in Shakespeare's Julius Caesar when Cassius attempts to persuade Brutus to murder Caesar.

Anchises himself died and was buried in Sicily many years later.

All content from Kiddle encyclopedia articles (including the article images and facts) can be freely used under Attribution-ShareAlike license, unless stated otherwise. Cite this article:
Anchises Facts for Kids. Kiddle Encyclopedia.