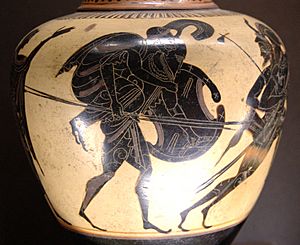 Aeneas carrying Anchises, about 500 BC, Louvre

Aeneas was a Trojan prince and hero. His father was Anchises, his mother was the Greek goddess Aphrodite (Venus in the case of Roman sources). Both Homer and Vergil mention him in their stories. Vergil wrote a whole series of books about him. These books are called Aeneis in their original Latin. The usual English translation of the title is Aeneid.

The books are the story of ""pious Aeneas". and about how the city of Rome came to be.

The tale starts with Aeneas carrying his father out of the burning Troy, and end with Romulus and Remus founding Rome (after Aeneas landed on the coast, after sailing the Mediterranean Sea for a long time). Aeneas also appears in Book 5 of the Iliad written by Homer.

William Shakespeare also wrote a story mentioning Aeneas. Christopher Marlowe wrote a play about Aeneas and Dido, the queen who fell in love with him. There is also an opera about Dido and Aeneas, written by Henry Purcell.

All content from Kiddle encyclopedia articles (including the article images and facts) can be freely used under Attribution-ShareAlike license, unless stated otherwise. Cite this article:
Aeneas Facts for Kids. Kiddle Encyclopedia.