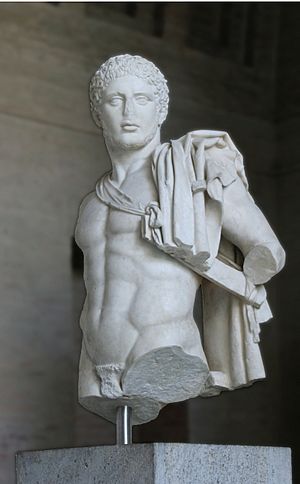 Diomedes (Greek: Διομήδης, Diomēdēs - "God-like cunning, advised by Zeus") was an ancient Greek hero and one of the central figures of the Iliad. Son of King Tydeus and Queen Deipyle, he was the leader of the Argive contingent during the Trojan War. Diomedes was, alongside Greater Ajax, regarded as one of the greatest of all the Achaean warriors, second only to Achilles in terms of prowess.

All content from Kiddle encyclopedia articles (including the article images and facts) can be freely used under Attribution-ShareAlike license, unless stated otherwise. Cite this article:
Diomedes Facts for Kids. Kiddle Encyclopedia.