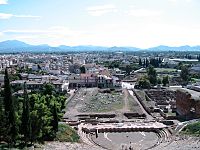 Argos is a city in south Greece, the capital of Argos-Mycenae Municipality. It is in the Argolis prefecture, which is on the Peloponnese peninsula. It is named after the child of Zeus and Niobe in Greek mythology. It is the biggest city in Argolida prefecture but the capital of prefecture is Nauplion. Argos is very historical city. The first residents arrived more than 7,000 years ago. It is considered the oldest city in Greece from ancient Greek writers.

The city houses numerous archaeological monuments. Agriculture is an important sector of the local economy.

All content from Kiddle encyclopedia articles (including the article images and facts) can be freely used under Attribution-ShareAlike license, unless stated otherwise. Cite this article:
Argos Facts for Kids. Kiddle Encyclopedia.