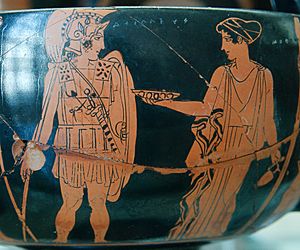 Achilles and the Nereid Cymothoe

Achilles or Achilleus was a hero in Greek mythology. In Homer's Iliad, Achilles was the son of Peleus and the Nereid Thetis. He was the greatest warrior of the Achaean Greeks in their struggle against the Trojans in the Trojan War. His story is at the centre of the Iliad, which starts with the dispute between Achilles and Agamemnon, the Greek king.

Achilles, believing that Agamemnon had dishonoured him, did not wish to bow to the king's leadership. He sat out the battle until the Trojans had almost won the war. Then he entered the battle. He killed the great Hektor, the son of Priam, and the Trojans' greatest hero. The tide of battle turned against the Trojans, and many were slaughtered. 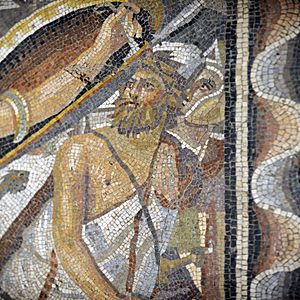 Achilles could not be hurt. In some versions of the myths, Thetis, his mother, dipped him into the river Styx, holding the baby by his left heel. Because of that, his heel was still vulnerable. However, the Iliad does not say this.

According to the legend, Achilles was killed by Paris, who shot his heel with a poisoned arrow. He was very angry. He cursed at Paris but Paris fled. Achilles was shot many times by the arrows of Paris' but the only arrow found on his body was through his heel.

In some versions, the god Apollo guided Paris' arrow. Some also state that Achilles was scaling the gates of Troy and was hit with a poisoned arrow. Many versions deny Paris any sort of valor, owing to the common conception that Paris was a coward and not the man his brother Hector was, and Achilles remained undefeated on the battlefield.

His bones were mingled with those of Patroclus, and funeral games were held. He was represented in the Aethiopis as living after his death on the island of Leuke at the mouth of the river Danube.

All content from Kiddle encyclopedia articles (including the article images and facts) can be freely used under Attribution-ShareAlike license, unless stated otherwise. Cite this article:
Achilles Facts for Kids. Kiddle Encyclopedia.