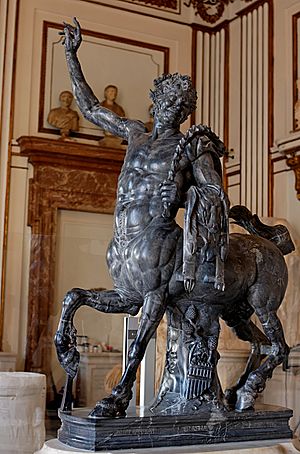 The young centaur at the Capitolini Museum

A centaur is a creature in Greek mythology. It has the upper body of a human, but below the waist it has the body of a horse. There are also female centaurs.

Famous centaurs are Chiron and Nessus.

The centaurs were usually said to have been born of Ixion and Nephele (the cloud made in the image of Hera). Another version, however, makes them children of a certain Centaurus, who mated with the Magnesian mares. This Centaurus was either himself the son of Ixion and Nephele (inserting an additional generation) or of Apollo and Stilbe, daughter of the river god Peneus. In the later version of the story his twin brother was Lapithes, ancestor of the Lapiths, thus making the two warring peoples cousins.

Centaurs were said to have inhabited the region of Magnesia and Mount Pelion in Thessaly, the Foloi oak forest in Elis, and the Malean peninsula in southern Laconia.

Another tribe of centaurs was said to have lived on Cyprus. According to Nonnus, they were fathered by Zeus, who, in frustration after Aphrodite had eluded him, spilled his seed on the ground of that land. Unlike those of mainland Greece, the Cyprian centaurs were horned.

There were also the Lamian Pheres, twelve rustic daimones of the Lamos river. They were set by Zeus to guard the infant Dionysos, protecting him from the machinations of Hera but the enraged goddess transformed them into ox-horned Centaurs. The Lamian Pheres later accompanied Dionysos in his campaign against the Indians.

Centaurs subsequently featured in Roman mythology, and were familiar figures in the medieval bestiary. They remain a staple of modern fantastic literature. The centaur's half-human, half-horse composition has led many writers to treat them as liminal beings, caught between the two natures, embodied in contrasted myths, both as the embodiment of untamed nature, as in their battle with the Lapiths (their kin), or conversely as teachers, like Chiron.

Other depictions in classical art 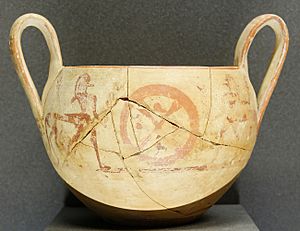 The tentative identification of two fragmentary Mycenaean terracotta figures as centaurs, among the extensive Mycenaean pottery found at Ugarit, suggests a Bronze Age origin for these creatures of myth. A painted terracotta centaur was found in the "Hero's tomb" at Lefkandi, and by the Geometric period, centaurs figure among the first representational figures painted on Greek pottery. An often-published Geometric period bronze of a warrior face-to-face with a centaur is at the Metropolitan Museum of Art.

In Greek art of the Archaic period, centaurs are depicted in three different forms. Some centaurs are depicted with a human torso attached to the body of a horse at the withers, where the horse's neck would be; this form, designated "Class A" by Professor Baur, later became standard. "Class B" centaurs are depicted with a human body and legs, joined at the waist with the hindquarters of a horse; in some cases centaurs of both types appear together. A third type, designated "Class C", depicts centaurs with human forelegs terminating in hooves. Baur describes this as an apparent development of Aeolic art, which never became particularly widespread. At a later period, paintings on some amphoras depict winged centaurs.

Centaurs were also frequently depicted in Roman art. A particularly famous example is the pair of centaurs drawing the chariot of Constantine the Great and his family, in the Great Cameo of Constantine (circa AD 314-16), which embodies wholly pagan imagery, and contrasts sharply with the popular image of Constantine as the patron of early Christianity.

All content from Kiddle encyclopedia articles (including the article images and facts) can be freely used under Attribution-ShareAlike license, unless stated otherwise. Cite this article:
Centaur Facts for Kids. Kiddle Encyclopedia.