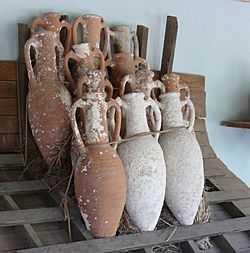 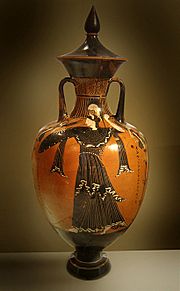 In Ancient Greece and Ancient Rome, amphoras were used to transport liquids or grain. Amphores had two handles, used for carrying. Amphores existed in different sizes, between 5 litres and 50 litres. They were made of clay, or metal. Cargo ships for liquids were full of amphorae.

Most of the amphoras that now exist were made in old times of Ancient Greece and Ancient Rome. However, many were made long before then. Some Amphoras are as old as 4500 BCE. Some varieties have been found in ancient China.

All content from Kiddle encyclopedia articles (including the article images and facts) can be freely used under Attribution-ShareAlike license, unless stated otherwise. Cite this article:
Amphora Facts for Kids. Kiddle Encyclopedia.