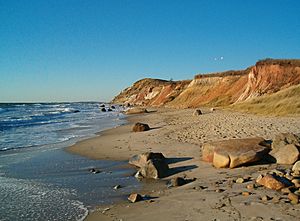 The Gay Head cliffs in Martha's Vineyard are made almost entirely of clay.

Clay is a naturally occurring material composed primarily of fine-grained minerals, which show plasticity through a variable range of water content, and which can be hardened when dried and/or fired.

Clay minerals are typically formed over long periods of time by the gradual chemical weathering of rocks (usually silicate-bearing) by low concentrations of carbonic acid and other diluted solvents. Clay deposits are typically associated with environments such as large lake and marine deposits.

Clays exhibit plasticity when mixed with water in certain proportions. When dry, clay becomes firm and when fired in a kiln, permanent physical and chemical reactions occur which, amongst other changes, causes the clay to be converted into a ceramic material. It is because of these properties that clay is used for making pottery items, both practical and decorative. 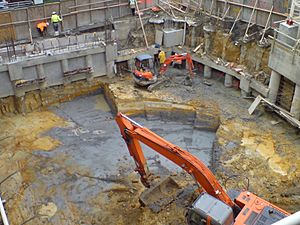 Clay layers in a construction site. Dry clay is normally much more stable than sand with regard to excavations.

Different types of clay, when used with different minerals and firing conditions, are used to produce earthenware, stoneware, and porcelain. Early humans discovered the useful properties of clay in prehistoric times, and one of the earliest artifacts ever uncovered is a drinking vessel made of sun-dried clay. Depending on the content of the soil, clay can appear in various colors, from a dull gray to a deep orange-red.

Clay tablets were used as the first writing medium, inscribed with cuneiform script through the use of a blunt reed called a stylus.

Clays sintered in fire were the first form of ceramic. Bricks, cooking pots, art objects, dishware and even musical instruments can all be shaped from clay before being fired. Clay is also used in many industrial processes, such as paper making, cement production and chemical filtering. Clay is also often used in the manufacture of pipes for smoking tobacco.

Clay, being relatively impermeable to water, is also used where natural seals are needed, such as in the cores of dams, or as a barrier in landfills against toxic seepage.

Recent studies have been carried out to investigate clay's adsorption capacities in various applications, such as the removal of heavy metals from waste water and air purification.

A recent article in The Journal of Antimicrobial Chemotherapy found that certain iron-rich clay was effective in killing bacteria.

All content from Kiddle encyclopedia articles (including the article images and facts) can be freely used under Attribution-ShareAlike license, unless stated otherwise. Cite this article:
Clay Facts for Kids. Kiddle Encyclopedia.