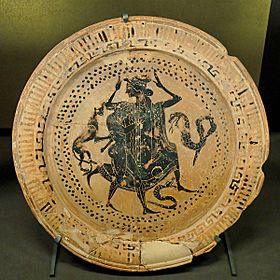 Peleus makes off with his prize bride Thetis, who has vainly assumed animal forms to escape him: Boeotian black-figure dish, ca. 500 BC–475 BC

All content from Kiddle encyclopedia articles (including the article images and facts) can be freely used under Attribution-ShareAlike license, unless stated otherwise. Cite this article:
Peleus Facts for Kids. Kiddle Encyclopedia.