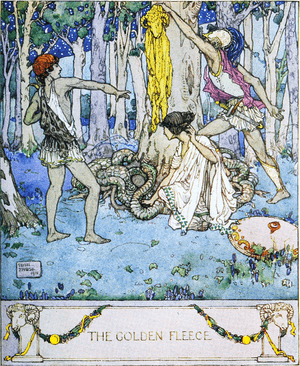 Jason was an ancient Greek mythological hero who was the leader of the Argonauts whose quest for the Golden Fleece featured in Greek literature. He was the son of Aeson, the rightful king of Iolcos. He was married to the sorceress Medea. He was also the great-grandson of the messenger god Hermes, through his mother's side.

Jason appeared in various literary works in the classical world of Greece and Rome, including the epic poem Argonautica and the tragedy Medea. In the modern world, Jason has emerged as a character in various adaptations of his myths, such as the 1963 film Jason and the Argonauts and the 2000 TV miniseries of the same name. 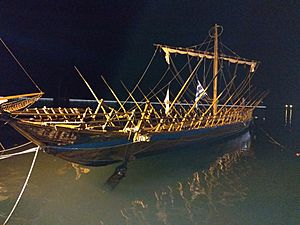 Jason was the captain of the ship called the Argos. The men who helped to sail the boat were called the Argonauts. The word Argonaut comes from the name of the boat: Argo and the word ending -naut. The ending -naut is used in other words about the ocean such as nautical.

All content from Kiddle encyclopedia articles (including the article images and facts) can be freely used under Attribution-ShareAlike license, unless stated otherwise. Cite this article:
Jason Facts for Kids. Kiddle Encyclopedia.