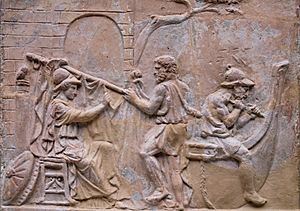 Athena helps to build the Argo

Argonautica is a Greek epic poem by Apollonius of Rhodes. It was written in the 3rd century BC. It tells the story of Jason and the Golden Fleece.

All content from Kiddle encyclopedia articles (including the article images and facts) can be freely used under Attribution-ShareAlike license, unless stated otherwise. Cite this article:
Argonautica Facts for Kids. Kiddle Encyclopedia.