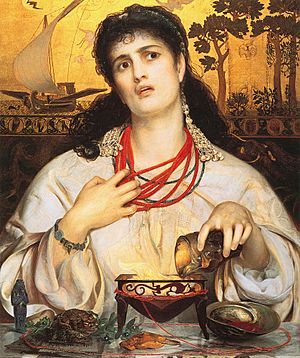 Medea by Anthony Frederick Augustus Sandys (painted 1866-68); The painting was not accepted for the exhibition in the Royal Academy in 1868. This rejection caused a storm of protest.

A poster by Alfons Mucha, for a theatre piece starring Sarah Bernardt as Medea (1898)

In Greek mythology, Medea ( Greek: Μήδεια, Mēdeia, Georgian: მედეა, Medea) is a sorceress of Greek mythology. She was the daughter of King Aeëtes of Colchis, niece of Circe, granddaughter of the sun god Helios. She married the hero Jason, and had two children with him, Mermeros and Pheres. In Euripides's play Medea, Jason leaves Medea when Creon, king of Corinth, offers him his daughter, Glauce. The play tells of Medea avenging her husband's betrayal by killing their children.

The myths involving Jason have been interpreted as part of a class of myths that tell how the Hellenes of the distant heroic age, before the Trojan War, faced the challenges of the pre-Greek "Pelasgian" cultures of mainland Greece, the Aegean and Anatolia. Jason, Perseus, Theseus, and above all Heracles, are all figures on the threshold between the old world of shamans, earth deities, and the new Bronze Age Greek ways.

Medea figures in the myth of Jason and the Argonauts, a myth known best from a late literary version worked up by Apollonius of Rhodes in the 3rd century BC and called the Argonautica. However, for all its self-consciousness and researched archaic vocabulary, the late epic was based on very old, scattered materials. Medea is known in most stories as an enchantress and is often depicted as a priestess of the goddess Hecate or a witch. The myth of Jason and Medea is very old, originally written around the time Hesiod wrote the Theogony. It was known to the composer of the Little Iliad, part of the Epic Cycle.

All content from Kiddle encyclopedia articles (including the article images and facts) can be freely used under Attribution-ShareAlike license, unless stated otherwise. Cite this article:
Medea Facts for Kids. Kiddle Encyclopedia.