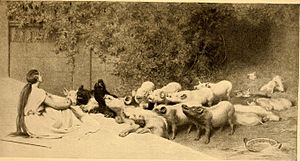 In Greek mythology, Circe ( Greek Κίρκη Kírkē "falcon") is a minor goddess of magic (or sometimes a nymph, witch, enchantress or sorceress), described in Homer's Odyssey as "The loveliest of all immortals". Having murdered her husband, the prince of Colchis, she was expelled by her subjects and placed by her father on the solitary island of Aeaea. Later traditions tell of her leaving or even destroying the island and moving to Italy. In particular she was identified with Cape Circeo there.

By most accounts, Circe was the daughter of Helios, the god of the sun, and Perse, an Oceanid. Her brothers were Aeetes, the keeper of the Golden Fleece and Perses, and her sister was Pasiphaë, the wife of King Minos and mother of the Minotaur. Other accounts make her the daughter of Hecate.

Circe was renowned for her vast knowledge of drugs and herbs. Through the use of magical potions and a wand she transformed her enemies, or those who offended her, into animals.

In Homer's Odyssey, Circe is described as living in a mansion that stands in the middle of a clearing in a dense wood. Around the house prowled strangely docile lions and wolves, the drugged victims of her magic; they were not dangerous, and fawned on all newcomers. Circe worked at a huge loom. She invited Odysseus' crew to a feast of familiar food, a pottage of cheese and meal, sweetened with honey and laced with wine, but also laced with one of her magical potions, and she turned them all into swine with a wand after they gorged themselves on it. Only Eurylochus, suspecting treachery from the outset, escaped to warn Odysseus and the others who had stayed behind at the ships. Odysseus set out to rescue his men, but was intercepted by his great grandfather, Hermes, who had been sent by Athena. Hermes told Odysseus to use the holy herb moly to protect himself from Circe's potion. Odysseus followed Hermes's advice, freeing his men and then remained on the island for one year, feasting and drinking wine. According to Homer, Circe suggested two alternative routes to Odysseus to return to Ithaca: toward the "Wandering Rocks" or passing between the dangerous Scylla and the whirlpool Charybdis, conventionally identified with the Strait of Messina. She also advised Odysseus to go to the Underworld and gave him directions.

Towards the end of Hesiod's Theogony (1011f), we find that Circe bore Odysseus three sons: Ardeas or Agrius (otherwise unknown); Latinus; and Telegonus, who ruled over the Tyrsenoi.

In the 3rd century BC epic, the Argonautica, Apollonius Rhodius relates that Circe purified the Argonauts for the death of Absyrtus, maybe reflecting an early tradition. In this poem, the animals that surround her are primeval ‘beasts, not resembling the beasts of the wild, nor yet like men in body, but with a medley of limbs.’

Three ancient plays about Circe have been lost: the work of the tragedian Aeschylus and of the 4th century BC comic dramatists Ephippus of Athens and Anaxilas. The first told the story of Odysseus' encounter with Circe. Vase paintings from the period suggest that Odysseus' half-transformed animal-men formed the chorus in place of the usual Satyrs. Fragments of Anaxilas also mention the transformation and one of the characters complains of the impossibility of scratching his face now that he is a pig.

All content from Kiddle encyclopedia articles (including the article images and facts) can be freely used under Attribution-ShareAlike license, unless stated otherwise. Cite this article:
Circe Facts for Kids. Kiddle Encyclopedia.