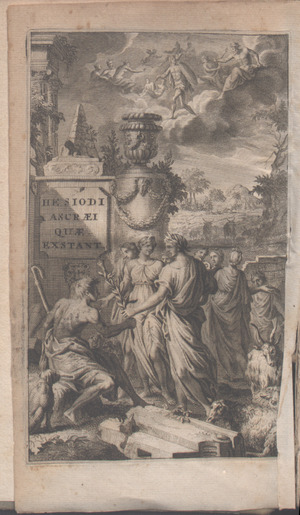 Hesiod (Hesiodos, Ἡσίοδος) was an Ancient Greek poet. He is probably the second Greek poet whose work has survived; like Homer, his dates are not known for certain. As with Homer, there are numerous legends, none of which are supported by hard evidence. He may have lived around 700 BC in Askra in Boeotia, as a farmer. Today his writings are one of the main sources for Greek mythology, and everyday life in Ancient Greece, such as farming techniques, astronomy and ancient time-keeping. The complete surviving works were published in 1493, and by Aldus Manutius in 1495.

All content from Kiddle encyclopedia articles (including the article images and facts) can be freely used under Attribution-ShareAlike license, unless stated otherwise. Cite this article:
Hesiod Facts for Kids. Kiddle Encyclopedia.