Cosmogony is any theory of the origin of the universe. 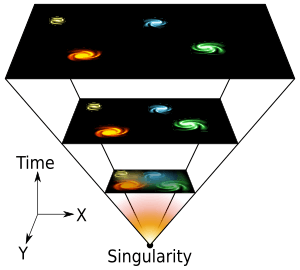 The Big Bang theory states that the universe originally expanded from a point.

In astronomy, cosmogony is the study of the origin of things like the universe, the Solar System, or the Earth–Moon system. The popular cosmological model for the birth of the universe is the Big Bang theory.

People disagree on the origins of the singularity.

It may be like a black hole, which is a singularity sincegravity in a black hole becomes boundless.

There is currently no theoretical model that explains the earliest moments of the universe's existence (during the Planck time). This is because we lack a testable theory of quantum gravity. Still, some researchers in string theory, M theory, and loop quantum cosmology have some ideas.

There are certain myths that also propose how the universe was created: for example creation myths in the Bible, the Dào Dé Jīng, and other genesis stories. These usually involve

The Eridu Genesis, written on Sumerian tablets, is one of the oldest creation myths. The universe was created from a sea (Abzu). In Greek mythology, Zeus created the universe.

It is not the same as cosmology

All content from Kiddle encyclopedia articles (including the article images and facts) can be freely used under Attribution-ShareAlike license, unless stated otherwise. Cite this article:
Cosmogony Facts for Kids. Kiddle Encyclopedia.