Seneca the Younger facts for kids 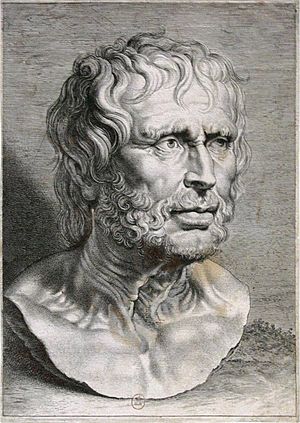 Seneca Lucius Anaeus junior was a Roman philosopher, poet and politician. He was born about 4 B. C. in Hispanic Cordoba. Seneca was a son of rhetorician and writer. He died by suicide in year 65 in Rome.

During the reign of emperor Claudius, Seneca was in exile for nine years. This act was result of wish Caesars dissolute wife Messalina … according to the historical use. Rather for gossip and opposition … in fact. After wedding ceremony Claudia with Agrippina was Seneca called back and determined as tutor her son, next Caesar Nero. In first universally praised and successful five-year Nero government (54-59) was Seneca regent. He and prefect Sexet Afranie Burre (Commander of the Imperial Guard) directed Roman Empire. But Nero accused him (mistakenly) from participation of senatorial conspiracy (whose harmoniously attended by adherents of republic and adherents of empire) in 65. The point of conspiracy was especially against tyrant- Nero. This was because Seneca decided to kill himself.

As a philosopher is main representative of Roman stoicism. He emphasized practice and interface with another philosophical systems especially with epicureanism. His main interest is reversed to ethics. (right way of life) , mere theorizing refuses. Most are valued these writings, in which he interprets ethics by communicating and commenting on his own life and moral experience. These include mainly Letters to Lucilia and detailed explanation of problems in Dialogues (practically monologues) . Seneca theoretically reported to the doctrine of the equality of people, which in practice has led to kindly treatment of slaves. He also wrote nine tragedies with traditional mythological themes: Growing Hercules, Trojan Women, Phoenician Women, Phaedra, Oedipus, etc. which are today presented as ancient Roman tragedies.

All content from Kiddle encyclopedia articles (including the article images and facts) can be freely used under Attribution-ShareAlike license, unless stated otherwise. Cite this article:
Seneca the Younger Facts for Kids. Kiddle Encyclopedia.