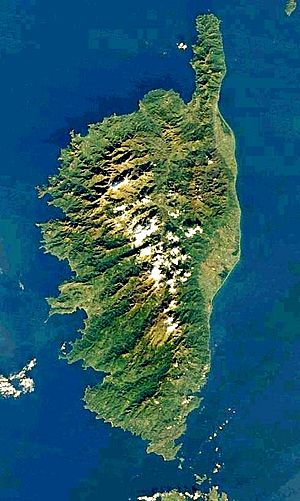 Corsica is the fourth largest island in the Mediterranean Sea (after Sicily, Sardinia, and Cyprus). It is west of Italy, southeast of France, and north of the island of Sardinia.

Corsica is one of the administrative regions of France. Some people want Corsica to be a part of Italy.

Corsica is famous in the world for the beautiful places for tourism and as the birthplace of Napoléon Bonaparte. 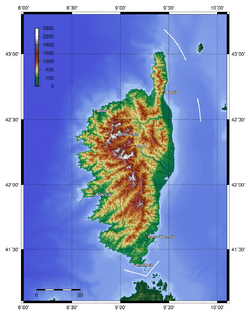 Other towns and villages:

The land and weather

Corsica is the most mountainous Mediterranean island. The low ground has a Mediterranean climate. Summers are hot and dry. Winters are mild with moderate rainfall. The climate of the high ground is cold and is wetter. The natural vegetation is Mediterranean forests, woodlands, and shrubs. The mountains are rich of forests of oak, and pine, except for the high ground. Much of the coastal lowlands has been cleared for agriculture, which has reduced the mountain forests considerably. The island has a natural park (Parc Naturel Régional de Corse), which protects thousands of rare animal and plant species. The park was created in 1972 and includes the Golfe de Porto, the Réserve Naturelle de Scandola (a UNESCO World Heritage Site), and some of the highest mountains on the island. This park is protected. 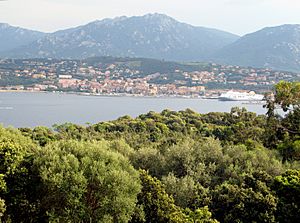 Corsica's spectacular coastline is a major drive for tourism (here by the town of Propriano).

Tourism is the biggest source of Corsican economy. The island has a pleasant climate, beautiful mountains and really beautiful coastlines that make it a popular destination among the French and other Western Europeans. However, the island has not had the same level of intensive development as other parts of the Mediterranean. Tourism is particularly concentrated in the area around Porto Vecchio and Bonifacio in the south of the island and Calvi in the northwest.

In 2000, Prime Minister Lionel Jospin agreed to give more autonomy to Corsica. The propose of autonomy for Corsica would have included greater protection for the Corsican language (Corsu), the island's traditional language (which is also considered to be a dialect of Italian).

However, the plans for increased autonomy were opposed by the Gaullist opposition in the French National Assembly. In a referendum on July 6,2003, a narrow majority of Corsican voters opposed to the project from the government of Jean-Pierre Raffarin and Interior Minister Nicolas Sarkozy that would have suppressed the two départements of the island and granted more autonomy to the territorial collectivity of Corsica.

"U Corsu", language of Corsica

In Corsica the official language is French, but lots of people speak, "u corsu", the language of Corsica, protected by UNESCO. Corsu shares some similarities with Tuscan dialects (with their accents) or to Gallurese language, spoken in the nearby island of Sardinia. Corsu has two varietes, "Supranacciu", common in the northeast of theisland, (Bastia, Corte), and the "Suttanacciu" common in the south of the island, (Ajaccio, Sartene). The native Corsican language is closer to Italian than French, but both come from Latin. The ancient Romans spoke Latin.

For more information about the dialect, see Corsican language.

In Corsica, football is a very common sport. The island has in the first league of France ('Ligue 1'), 2 teams. The AC Ajaccio and the SC Bastia. Another very famous sport in Corsica, is volleyball, with the GFCO Ajaccio Volley-Ball' team.

All content from Kiddle encyclopedia articles (including the article images and facts) can be freely used under Attribution-ShareAlike license, unless stated otherwise. Cite this article:
Corsica Facts for Kids. Kiddle Encyclopedia.