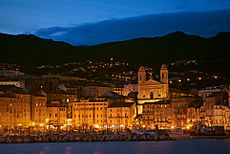 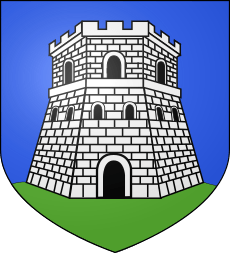 Bastia is a town and commune of northern Corsica, in France. It is the capital (in French "préfecture") of the Haute-Corse département and has a population of about 40,000 inhabitants. Bastia is also an important Corsican port and is famous for its wines. The rate of unemployment in the commune has been very high, and was 20% in 2004.

Bastia is in the northeast of Corsica, at the base of Cap Corse. Bastia is the main port of the island and its principal commercial town. The wind in Bastia is frequent and violent.

Before the occupation of Corsica by the Genoese, Cardo was a large city. Around the city were little villages where the fishermen of Cardo lived. This little port was called Porto Cardo, which means "the port of Cardo."

The Genoese felt the need to shelter the city from the sea storms and began to construct walls and buildings. In the time of governor Leonello Lomellini, in 1380, they built a bastiglia, also known as a citadel. With time, the bastiglia (Bastia) became more prosperous and important than Cardo.

Bastia was the capital of Corsica until 1791.

Places of interest and monuments

The official football team of Basti is the Sporting Club de Bastia.

All content from Kiddle encyclopedia articles (including the article images and facts) can be freely used under Attribution-ShareAlike license, unless stated otherwise. Cite this article:
Bastia Facts for Kids. Kiddle Encyclopedia.