Calvi is a small town and commune of the Haute-Corse, in France. It is on the northwest coast of the island of Corsica, 95 km from Bastia and 24 km from L'Île-Rousse. The town has 5,177 people (1999), and is the fifth-largest commune in Corsica. There is a legend that Christopher Columbus was from Calvi, which at the time was part of the Genoese empire. The 2nd Foreign Parachute Regiment of the French Foreign Legion is based in Calvi.

The economy of Calvi is mainly based on tourism, which started in 1950. 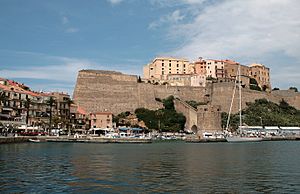 The port and the citadel of Calvi.

All content from Kiddle encyclopedia articles (including the article images and facts) can be freely used under Attribution-ShareAlike license, unless stated otherwise. Cite this article:
Calvi, Haute-Corse Facts for Kids. Kiddle Encyclopedia.