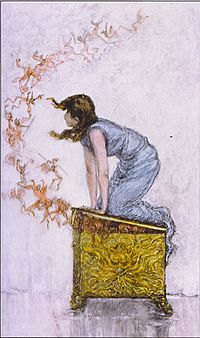 Pandora trying to close the box she has opened. At left, the evils of the world taunt her as they escape. Engraving, based on a painting by F.S. Church.

In Greek mythology, Pandora was the first mortal woman made by Zeus. The name can be translated as all-giver (from pan - all and dóron - gift).

She was made because Zeus was mad at Prometheus because he gave mortal humans the gift of fire.

Pandora was given a jar (called pithos in Greek), and was told never to open it. However, she became curious, and opened it anyway. Evil had been in the jar, and escaped and spread over the entire Earth. Pandora realized what she had done, and quickly closed the jar. It was too late to keep evil from getting out, and the only thing left in the jar was hope. The word "jar" in the myth has sometimes been mistranslated as "box", and the phrase "Pandora's box" has become a common phrase in the English language. It refers to something that will cause trouble.

The myth of Pandora is ancient, and there are several different Greek versions. It has been interpreted in different ways. It addresses the question why there is evil in the world.

All content from Kiddle encyclopedia articles (including the article images and facts) can be freely used under Attribution-ShareAlike license, unless stated otherwise. Cite this article:
Pandora Facts for Kids. Kiddle Encyclopedia.