Ages of Man facts for kids 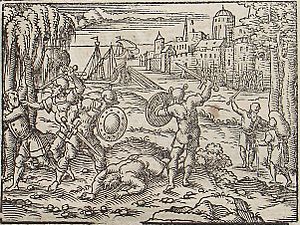 Ages of Man is an Ancient Greek myth that divides the history of the world into five eras. In the first eras, humans lived close to gods and were happy. In the latest eras, the gods have left the world and humans live in pain and unhappiness. This myth was first written down by Greek poet Hesiod, about 2700 years ago.

All content from Kiddle encyclopedia articles (including the article images and facts) can be freely used under Attribution-ShareAlike license, unless stated otherwise. Cite this article:
Ages of Man Facts for Kids. Kiddle Encyclopedia.