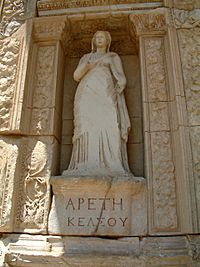 Virtue (Latin virtus; Greek ἀρετή) is a kind of behaviour which is thought to be good. The adjective is "virtuous". Someone who lives a virtuous life is someone who leads a good moral life, doing things that society thinks are good. The opposite of virtue is vice.

Philosophers throughout the ages have written their ideas about what they think virtue is. The Ancient Greek philosophers from Plato onwards said that virtue consisted of four things: Justice, Courage, Wisdom, and Moderation. In the Christian religion the three virtues were Faith, Hope and Charity. These are mentioned in the Bible in the First Epistle to the Corinthians chapter 13 verse 13. These virtues are also very important in the Judaic and Muslim traditions.

All content from Kiddle encyclopedia articles (including the article images and facts) can be freely used under Attribution-ShareAlike license, unless stated otherwise. Cite this article:
Virtue Facts for Kids. Kiddle Encyclopedia.