Hope is an optimistic state of mind that is based on an expectation of positive outcomes with respect to events and circumstances in one's life or the world at large. As a verb, its definitions include: "expect with confidence" and "to cherish a desire with anticipation".

Among its opposites are dejection, hopelessness and despair. 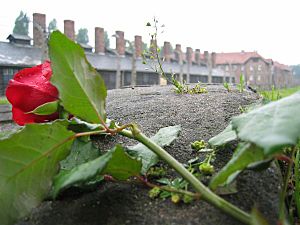 As a specialist in positive psychology, The psychologist Charles R. Snyder studied how hope and forgiveness can impact several aspects of life such as health, work, education, and personal meaning. He postulated that there are three main things that make up hopeful thinking:

In other words, hope was defined as the perceived capability to derive pathways to desired goals and motivate oneself via agency thinking to use those pathways.

All content from Kiddle encyclopedia articles (including the article images and facts) can be freely used under Attribution-ShareAlike license, unless stated otherwise. Cite this article:
Hope Facts for Kids. Kiddle Encyclopedia.