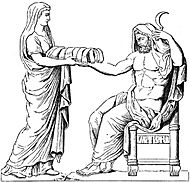 Kronos and his wife Rhea

Kronos, also spelled Cronus (Greek: Κρόνος, Krónos; Latin: CRONVS, Cronus), is the leader of the Titans and the Titan of time in Greek mythology. The son of Gaia (Mother Earth) and Ouranos (Father Sky), he was the youngest of his brothers. At the urging of Gaia, Kronos overthrew him, ruling the cosmos as king during the so-called Golden Age. Kronos married Rhea, and sired the first generation of the Olympian gods: Hestia, Demeter, Hera, Hades, Poseidon, and Zeus.

In fear of a prophecy that told of him being overthrown by his own children, Kronos swallowed each of them as soon they were born. Only the youngest, Zeus, managed to escape this fate and, after freeing his siblings, waged war against Kronos and the other Titans. During this Titanomachy, the Olympians emerged victorious, and Kronos himself was cast into Tartarus. In some versions, Kronos was later freed by Zeus and became ruler of the Elysian Islands.

Kronos appears as the main antagonist in Rick Riordan's Percy Jackson and the Olympians series.

All content from Kiddle encyclopedia articles (including the article images and facts) can be freely used under Attribution-ShareAlike license, unless stated otherwise. Cite this article:
Kronos Facts for Kids. Kiddle Encyclopedia.