The Klingons are a fictional species in the science fiction franchise Star Trek. Developed by screenwriter Gene L. Coon in 1967 for the original Star Trek (TOS) series, Klingons were humanoids characterized by prideful ruthlessness and brutality.

Klingons practiced feudalism and authoritarianism, with a warrior caste relying on slave labor. They had characteristics of both Nazi Germany and the Soviet Union.

With a greatly expanded budget for makeup and effects, the Klingons were completely redesigned for Star Trek: The Motion Picture (1979), acquiring ridged foreheads. In subsequent television series and in later films, the militaristic traits of the Klingons were provided with an increased sense of honor and strict warrior code similar to those of bushido.

Klingons are recurring adversaries in the 1960s television series Star Trek, and have appeared in all subsequent series, along with ten of the Star Trek feature films.

Initially intended to be adversaries for the crew of the USS Enterprise, the Klingons became a close ally of humanity in Star Trek: The Next Generation. In the 1990s series Star Trek: Deep Space Nine, humans and Klingons join with the Romulans to fight the Dominion.

Among the elements created for the revised Klingons was a complete Klingon language, developed by Marc Okrand from gibberish suggested by actor James Doohan. Spoken Klingon has entered popular culture, even to the extent that the works of William Shakespeare and parts of the Bible have been translated into it.

A dictionary, a book of sayings, and a cultural guide to the language have been published. According to the Guinness World Records, Klingon is the world's most popular fictional language as measured by number of speakers. 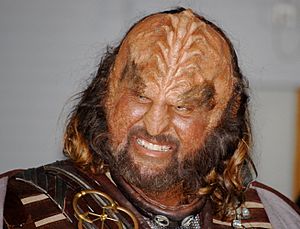 The Klingons were created by screenwriter Gene L. Coon, and first appeared in the Star Trek episode "Errand of Mercy" (1967). They were named after Lieutenant Wilbur Clingan, who served with Star Trek creator Gene Roddenberry in the Los Angeles Police Department.

In the original television series (TOS), Klingons were typically portrayed with bronze skin and facial hair suggestive of Asian people, and possessed physical abilities similar to humans. The dark look of Klingon males was created with the application of shoe polish and long, thin moustaches; budget constraints limited creativity.

The Klingons took on the role of the Soviet Union with the fictional government, the United Federation of Planets playing the role of the United States. As such, they were generally portrayed as inferior to the crew of the Enterprise. While occasionally capable of honour, this depiction treated the Klingons as close to wild animals.

Overall, they were shown without redeeming qualities—brutish, scheming, and murderous. Klingons became the primary adversaries of the Enterprise crew, in part because the makeup necessary to make another alien race, the Romulans, was too time-consuming and costly.

For the first two seasons, no Klingon ships were seen despite being frequently mentioned. This was because of budget constraints; designer Matt Jefferies did not have the money to create a Klingon ship until the third season. When the episodes were remastered beginning in 2006, Klingon ships were digitally inserted into shots earlier than their original appearances.

All content from Kiddle encyclopedia articles (including the article images and facts) can be freely used under Attribution-ShareAlike license, unless stated otherwise. Cite this article:
Klingon Facts for Kids. Kiddle Encyclopedia.