The Incredibles facts for kids

The Incredibles is a 2004 American computer-animated superhero film written and directed by Brad Bird, produced by Pixar Animation Studios, released by Walt Disney Pictures, and starring the voices of Craig T. Nelson, Holly Hunter, Sarah Vowell, Spencer Fox, Jason Lee, Samuel L. Jackson, and Elizabeth Peña. Set in an alternate version of the 1960s, the film follows the Parrs, a family of superheroes who hide their powers in accordance with a government mandate, and attempt to live a quiet suburban life. Mr. Incredible's desire to help people draws the entire family into a confrontation with a vengeful fan-turned-foe and his killer robot.

Bird, who was Pixar's first outside director, developed the film as an extension of the 1960s comic books and spy films from his boyhood and personal family life. He pitched the film to Pixar after the box office disappointment of his first feature, The Iron Giant (1999), and carried over much of its staff to develop The Incredibles. The animation team was tasked with animating an all-human cast, which required creating new technology to animate detailed human anatomy, clothing and realistic skin and hair. Michael Giacchino composed the film's orchestral score.

The film premiered on October 27, 2004, at the BFI London Film Festival and had its general release in the United States on November 5, 2004. It performed well at the box office, grossing $633 million worldwide during its original theatrical run. The Incredibles received widespread approval from critics and audiences, winning two Academy Awards and the Annie Award for Best Animated Feature. It was the first entirely animated film to win the prestigious Hugo Award for Best Dramatic Presentation. A sequel, Incredibles 2, was released June 15, 2018.

Public opinion turns against Superheroes due to the collateral damage caused by their crime-fighting. After several lawsuits, the government initiates the Superhero Relocation Program, which forces Supers to permanently adhere to their secret identities, making them illegal. Fifteen years later, Bob and Helen Parr—formerly known as Mr. Incredible and Elastigirl—and their children Violet, Dash, and baby Jack-Jack are a suburban family living in Metroville. Although he loves his family, Bob resents the mundanity of his suburban lifestyle and white-collar job. Together with his friend Lucius Best, formerly known as Frozone, Bob occasionally relives "the glory days" by moonlighting as a vigilante.

After his supervisor prevents him from stopping a mugging, Bob loses his temper and injures him, resulting in his dismissal. Returning home, Bob receives a message from a woman called Mirage, who gives him a mission to destroy a savage tripod-like robot, the Omnidroid, on the remote island of Nomanisan. Mr. Incredible battles and disables it by tricking it into ripping off its own power source.

Mr. Incredible finds the action and higher pay rejuvenating. He improves his relationship with his family and begins rigorous physical training while awaiting more work from Mirage for the next two months. Finding a tear in his blue suit, he visits superhero costume designer Edna Mode to have it mended. Assuming that Helen knows what Bob is doing, Edna also makes new suits for the entire family. Setting out for Nomanisan once again, Mr. Incredible discovers Mirage is working for Buddy Pine, a disaffected former fan whom he had rejected as his sidekick, Incrediboy. Having adopted the alias of Syndrome, he has been perfecting the Omnidroid by hiring different superheroes to fight it, killing many of them in the process. Syndrome intends to send the latest Omnidroid to Metroville, where he will secretly manipulate its controls to defeat it in public, becoming a "hero" himself. Later, he will sell his inventions so that everyone can become "super", rendering the term meaningless.

Helen visits Edna and learns what Bob has been up to. She activates a beacon Edna built into the suits to find Mr. Incredible, inadvertently causing him to be captured while infiltrating Syndrome's base. Elastigirl borrows a private plane to head for Nomanisan. She finds out that Violet and Dash have stowed away, leaving Jack-Jack with a babysitter. Elastigirl's radio transmissions are picked up by Syndrome, who sends missiles to shoot her down. The plane is destroyed, but Elastigirl and the kids survive and use their powers to reach the island. Helen infiltrates the base and discovers Syndrome's plan. Discontented with Syndrome's indifference when her life was threatened, Mirage releases Mr. Incredible and informs him of his family's survival. Helen arrives and races off with Mr. Incredible to find their children. Dash and Violet are chased by Syndrome's guards, but fend them off with their powers before reuniting with their parents. Syndrome captures them all, leaving them imprisoned while he follows the rocket transporting the Omnidroid to Metroville.

The Incredibles escape to Metroville in another rocket with Mirage's help. As per its programming, the Omnidroid recognizes Syndrome as a threat and shoots off the remote control on his wrist, making him incapable of controlling it and knocking him unconscious. The Incredibles and Frozone fight the Omnidroid. Elastigirl acquires the remote control, allowing Mr. Incredible to use one of the robot's claws to destroy its power source. Returning home, the Incredibles find Syndrome, who plans to kidnap and raise Jack-Jack as his own sidekick to exact revenge on the family. As Syndrome is flying upward to reach his jet, Jack-Jack's own superpowers start to manifest and he escapes Syndrome midair. As Elastigirl catches Jack-Jack, Syndrome boards his plane, but Mr. Incredible throws his car at the villain, causing him to get sucked into the jet's turbine by his own cape, killing him and causing the plane to explode.

Three months later, the Incredibles witness the arrival of a supervillain called the Underminer. They put on their superhero masks, ready to face the new threat together as a family. 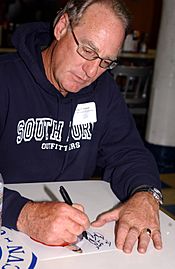 All content from Kiddle encyclopedia articles (including the article images and facts) can be freely used under Attribution-ShareAlike license, unless stated otherwise. Cite this article:
The Incredibles Facts for Kids. Kiddle Encyclopedia.