Mary Jean "Lily" Tomlin (born September 1, 1939) is an American actress, comedian, writer, singer, and producer. Tomlin began her career as a stand-up comic as well as performing Off-Broadway during the 1960s. Her breakout role was on the variety show Rowan & Martin's Laugh-In from 1969 until 1973. She currently stars on the Netflix series Grace and Frankie as Frankie Bergstein; the role has garnered her four consecutive Emmy nominations since 2015.

In 1974, Tomlin was cast by Robert Altman in her first film; her performance as Linnea Reese in Nashville won her several awards and nominations for the Golden Globe and Academy Award for Best Supporting Actress.

Her signature role was written by her then partner (now wife), Jane Wagner, in a show titled The Search for Signs of Intelligent Life in the Universe which opened on Broadway in 1985 and won Tomlin the Tony Award for Best Lead Actress in a Play.

She is also known as the voice of Ms. Frizzle on the children's series The Magic School Bus.

She won her first Emmy Awards in 1974 for writing and producing her own television special, Lily. Tomlin won a Grammy Award for her 1972 comedy album This Is a Recording. In 2014, she was given Kennedy Center Honors and in 2017 she received the Screen Actors Guild Life Achievement Award. 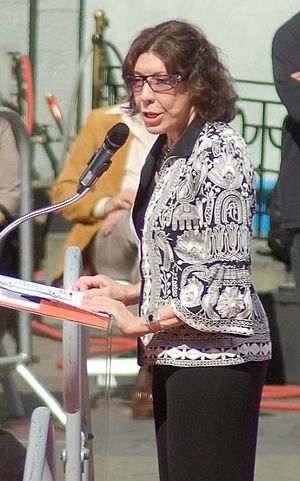 Tomlin met her future wife, writer Jane Wagner, in March 1971. After watching the after-school TV special "J.T." written by Wagner, Tomlin invited Wagner to Los Angeles to collaborate on Tomlin's comedy LP record album And That's The Truth. The couple did not have a formal coming out.

On December 31, 2013, Tomlin and Wagner married in a private ceremony in Los Angeles after 42 years together.

All content from Kiddle encyclopedia articles (including the article images and facts) can be freely used under Attribution-ShareAlike license, unless stated otherwise. Cite this article:
Lily Tomlin Facts for Kids. Kiddle Encyclopedia.