Ramón Gerard Antonio Estévez (born August 3, 1940), known professionally as Martin Sheen, is an American actor of Spanish/Irish descent who first became known for his roles in the films The Subject Was Roses (1968) and Badlands (1973), and later achieved wide recognition for his leading role in Apocalypse Now (1979) and as President Josiah Bartlet in the television series The West Wing (1999-2006).

In film, Sheen has won the Best Actor award at the San Sebastián International Film Festival for his performance as Kit Carruthers in Badlands. Sheen's portrayal of Capt. Willard in Apocalypse Now earned a nomination for the BAFTA Award for Best Actor.

Sheen has worked with a wide variety of film directors, including Richard Attenborough, Francis Ford Coppola, Terrence Malick, David Cronenberg, Mike Nichols, Martin Scorsese, Steven Spielberg, and Oliver Stone. Sheen received a star on the Hollywood Walk of Fame in 1989. In television, Sheen has won a Golden Globe and two Screen Actors Guild awards for playing the role of President Josiah Bartlet in The West Wing, and an Emmy for guest starring in the sitcom Murphy Brown.

Born and raised in the United States by immigrant parents, he adopted the stage name Martin Sheen to help him gain acting parts. He is the father of four children, all of whom are actors.

Although known as an actor, Sheen also has directed one film, Cadence (1990), appearing alongside sons Charlie and Ramón. Sheen has narrated, produced, and directed documentary television, earning two Daytime Emmy awards in the 1980s. In addition to film and television, Sheen has been active in liberal politics.

Sheen was born in Dayton, Ohio, the son of Mary-Ann (née Phelan; 1903–1951) and Francisco Estévez Martínez (1898–1974). During birth, Sheen's left arm was crushed by forceps, giving him limited lateral movement of that arm, which is three inches (7.6 cm) shorter than his right (Erb's palsy). Both of Sheen's parents were immigrants; his mother from Borrisokane, County Tipperary, Ireland; and his father was born in Salceda de Caselas, Galicia, Spain. After moving to Dayton in the 1930s, his father was a factory worker/machinery inspector at the National Cash Register Company. Sheen grew up on Brown Street in the South Park neighborhood, one of ten children (nine boys and a girl). Due to his father's work, the family lived in Bermuda on St. John's Road, Pembroke, where five of his brothers were born. Martin was the first child to be born in Dayton, Ohio, after the family returned from Bermuda. Sheen contracted polio as a child and had to remain bedridden for a year. His doctor's treatment using Sister Kenny's method helped him regain use of his legs. 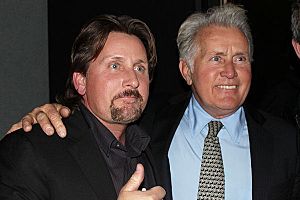 Sheen married Janet Templeton on December 23, 1961, and they have four children, three sons and a daughter, all of whom are actors: Emilio, Ramón, Carlos, and Renée. Carlos, however, decided to change his name when he began acting, calling himself Charlie Sheen after making the decision to Anglicize his first name and take his surname from his father's stage name.

Charlie and his father jointly parodied their respective previous roles in the 1993 movie Hot Shots! Part Deux when their river patrol boats passed each other, at which point they both shouted, "I loved you in Wall Street!" a film they both starred in as father and son in 1987.

He has played the father of sons Emilio Estevez and Charlie Sheen in various projects: he played Emilio's father in The War at Home, In the Custody of Strangers and The Way, and Charlie's father in Wall Street, No Code of Conduct, two episodes of Spin City, and Anger Management. He also appeared as a guest star in one episode of Two and a Half Men playing the father of Charlie's neighbor Rose (Melanie Lynskey), and another as guest star Denise Richards's father; at the time that episode aired, Richards was married to Charlie. Martin also played a "future" version of Charlie in a VISA TV commercial. Martin has played other characters with his children. He starred in the film Bobby, which was directed by Emilio, who also starred in the movie alongside his father. Renée had a supporting role in The West Wing, as one of President Josiah Bartlet's (Sheen) secretaries. Emilio also appeared, uncredited, in an episode of The West Wing portraying his father's character, President Bartlet, in home movie footage.

Sheen became a grandfather at age 43 when his son Emilio had a son named Taylor Levi with his girlfriend, Carey Salley. Sheen has a total of ten grandchildren, the other nine being: Paloma Rae (from Emilio), Cassandra, Sam J, Lola Rose, Bob and Max (from Charlie) and Katherine, Luis Jr. and Christopher (from Ramón) and one great-granddaughter Luna (from Cassandra).

He celebrated his 50th wedding anniversary in 2011.

In 2012, Sheen was a guest on the U.S. version of Who Do You Think You Are?, tracing his Irish and Spanish ancestry.

He underwent a quadruple heart bypass operation in December 2015.

All content from Kiddle encyclopedia articles (including the article images and facts) can be freely used under Attribution-ShareAlike license, unless stated otherwise. Cite this article:
Martin Sheen Facts for Kids. Kiddle Encyclopedia.