Lee was born at Stratford Hall in Westmoreland County, Virginia, on January 19, 1807. His parents were American Revolutionary War General and Governor of Virginia, Henry "Light-Horse Harry" Lee, and his wife, Anne Carter Lee. In 1818, Lee's father died in the West Indies. Robert was raised by his mother in Alexandria, Virginia.

Lee attended Eastern View, a school in Fauquier County, Virginia. He may have attended schools in Shirley, Virginia, and in Alexandria, Virginia as well. His mother instructed him in the Episcopalian faith. Lee attended the United States Military Academy at West Point and graduated second in the class of 1829. 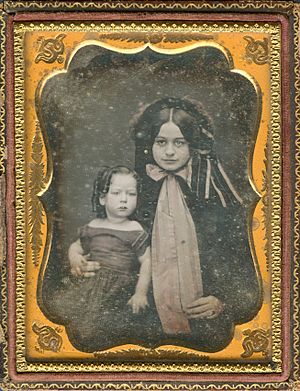 Lee fought in the Mexican–American War under General Winfield Scott as a captain. Later, Scott wrote about Lee calling him "the very best soldier I ever saw in the field." After the war, Lee helped the army build forts. In 1855, Lee became a lieutenant colonel and joined a cavalry regiment. As a Colonel, Lee was called on to stop the "slave rebellion," otherwise known as John Brown's raid on Harpers Ferry. Brown's raid was ended in less than an hour by Lee.

Lee inherited a number of slaves with Arlington House. However, the slaves knew their freedom had been granted them in the will and refused to work. Lee wanted to grant them their freedom but needed them to help him run Arlington House properly. He was kind and refused to use torture. Lee, like Thomas Jefferson had mixed feelings about slavery. Lee called slavery an "evil" to both blacks and whites, but saw the benefits of owning slaves. Lee thought slavery had to be ended gradually or the economy (a way of buying, selling, or trading things of value in order to manage how you live) of the South would collapse. However, Lee did agree with other Southerners in thinking that blacks were inferior. He believed God would work out the problem in His own time.

The election of Abraham Lincoln in 1860 caused several states to secede in protest. This put Lee in a difficult position. The newly formed Confederate States of America offered Lee the rank of brigadier general. Lee did not respond to the offer. Winfield Scott offered him command of the army of U.S. volunteers. He didn't answer this offer, either. Between April 12–14, 1861, U.S. troops were bombarded at Fort Sumter at Charleston, South Carolina. The same day, Virginia seceded from the Union. Lee did not support secession but he could not fight his own state of Virginia. Lee resigned his U.S. Army commission on April 22, 1861, at Arlington House. He told his friends that he would not be a part of an invasion of the South. Several days later he accepted command of all Virginia forces.

At first, Lee did not command any soldiers in battle. Instead, he helped Confederate president Jefferson Davis make military decisions. In 1862, he became the commander of the Army of Northern Virginia. He would lead the army for the rest of the war. He would win many battles, even though the Union army had more men and weapons. At the Battle of Gettysburg, he tried to invade the Union in order to end the war. But his army was defeated and he had to retreat back into Virginia.

During 1864 and 1865, Lee fought Union general Ulysses S. Grant in Virginia. Through the end of 1864 and the beginning of 1865, Lee and Grant fought near Richmond, Virginia, in a series of battles called the Siege of Petersburg. In April 1865, Grant forced Lee to retreat from Richmond. After a series of battles, Grant surrounded Lee near the Appomattox Courthouse and forced Lee to surrender. Before he surrendered, Lee said, "I would rather die a thousand deaths than surrender."

President Andrew Johnson issued a proclamation granting amnesty and pardon to those Confederates who were a part of the rebellion against the United States. It contained 14 exempted classes, and members of these groups had to make an application to the President of the United States asking for a pardon. On June 13, 1865, Lee wrote to President Johnson:

"Being excluded from the provisions of amnesty & pardon contained in the proclamation of the 29th Ulto; I hereby apply for the benefits, & full restoration of all rights & privileges extended to those included in its terms. I graduated at the Mil. Academy at West Point in June 1829. Resigned from the U.S. Army April '61. Was a General in the Confederate Army, & included in the surrender of the Army of N. Va. 9 April '65."

On October 2, 1865, Lee became president of Washington College in Virginia. That same day Lee signed his amnesty oath as required by President Johnson, but Lee was not pardoned and his citizenship was not restored during his lifetime.

His amnesty oath was found over a hundred years later in the National Archives. It appears that United States Secretary of State William H. Seward had given the application to a friend to keep as a souvenir. The State Department had simply ignored Lee's application and it was never granted. In a 1975 Joint resolution by the United States Congress, Lee's rights as a citizen were restored with the effective date of June 13, 1865. The act was signed into law by President Gerald R. Ford on August 5, 1975.

Lee had a stroke on September 28, 1870, and died on October 12, 1870. Washington College changed its name to Washington and Lee University in Lee's honor. Lee's birthday is celebrated in several southern states as a holiday.

All content from Kiddle encyclopedia articles (including the article images and facts) can be freely used under Attribution-ShareAlike license, unless stated otherwise. Cite this article:
Robert E. Lee Facts for Kids. Kiddle Encyclopedia.