Fort Sumter is a sea fort built on an artificial island protecting Charleston, South Carolina, from naval invasion. Its origin dates to the War of 1812 when the British invaded Washington by sea. It was still incomplete in 1861 when the Battle of Fort Sumter began the American Civil War. It was severely damaged during the war, left in ruins, and although there was some rebuilding, the fort as conceived was never completed.

Since the middle of the 20th century, Fort Sumter has been open to the public as part of the Fort Sumter and Fort Moultrie National Historical Park, operated by the National Park Service.

President James Madison recommended a series of coastal defenses in a message to Congress on December 5, 1815. This began a system of forts known as the "Third Coastal Defense System." Congress agreed, and construction began on these forts in 1816. One of the locations selected was in Charleston harbor. In 1829 construction began on a shoal in the harbor about 1 mile (1.6 km) west of Fort Moultrie. Over the next 16 years a 2.5-acre artificial island was created using 99,000 tons of rock and stone. The fort was designed to hold 650 officers and soldiers with 135 guns mounted on three rows, one above the next. All the guns would point toward the harbor. The fort was named for Brigadier General Thomas Sumter, a Revolutionary War hero.

The fort was about 90% complete when work stopped after South Carolina seceded from the Union in 1860. In the early hours of April 12, 1861, a mortar shell exploded over the fort, starting the Civil War. During the war, Fort Sumter remained in Confederate hands. From 1863 to 1865 Union forces attacked the fort. For 587 days Confederate soldiers held onto the fort, although by 1865 the fort had been completely destroyed by Union bombardments.

In 1870, the work of clearing the rubble started. The rebuilding of the fort was directed by General Quincy A. Gillmore. He had commanded the Union guns during the siege of the fort in 1861. But in 1876, the work stopped and the fort began to slowly deteriorate again. From 1876 to 1898, the fort served as a lighthouse.

In 1898, when the Spanish–American War started, Army engineers began rebuilding Fort Sumter again with a massive concrete battery (section of weapons) in the center of the fort. It mounted two 12-inch gun M1895 costal guns. The construction was not completed until after the war. During World War I the two-gun battery (called "Battery Huger") was manned by the U.S. Army. By World War II the guns were out-of-date. They were finally removed in 1943. Later in World War II, it became an Anti-aircraft battery. In 1948 the National Park Service took possession of the fort. 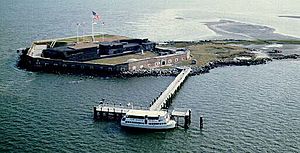 Today, the restored Fort Sumter, along with the Visitor's Center, Education Center (both in Charleston), and Fort Moultrie are popular tourist attractions. The fort is accessible only by special ferries that depart from Liberty Square. The ride to the island takes about 30 minutes. There is also a ferry service from Patriots Point which has parking for recreational and taller vehicles. The monument is open to visitors 362 days a year. The restored fort is one level instead of the former three levels. Several of the brick walls still have artillery projectiles stuck in the masonry. The park museum has a scale model of the original fort. It houses the original 33-star U.S. flag that flew during the first bombardment. Also on display is the original flag of the South Carolina militia (called the Palmetto Guard) who took possession of the fort after the Union surrender.

All content from Kiddle encyclopedia articles (including the article images and facts) can be freely used under Attribution-ShareAlike license, unless stated otherwise. Cite this article:
Fort Sumter Facts for Kids. Kiddle Encyclopedia.