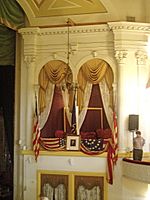 The box at Ford's Theater where Lincoln was shot

Ford's Theater is a building in Washington, D.C.. It is most well known as the place where Abraham Lincoln was shot by John Wilkes Booth during the play Our American Cousin. It is called Ford's Theater because it was run by a man named Ford during the American Civil War. The building has been rebuilt several times. Before the Civil War, it was used as church. After the Civil War, it was used as a museum, warehouse and office. It is now a National Historic Site.

All content from Kiddle encyclopedia articles (including the article images and facts) can be freely used under Attribution-ShareAlike license, unless stated otherwise. Cite this article:
Ford's Theater Facts for Kids. Kiddle Encyclopedia.