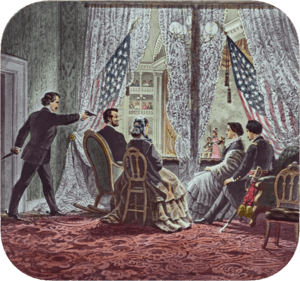 The assassination of Abraham Lincoln was one of the last events in the American Civil War, and happened on Good Friday, April 14, 1865. President Lincoln was shot while watching the play Our American Cousin at Ford's Theatre in Washington, D.C.. He died early the next morning.

Lincoln's killer, John Wilkes Booth, was an actor and Confederate supporter who had plotted with other men to kill the Secretary of State, William H. Seward and the Vice President Andrew Johnson. Booth hoped to create disorder and overthrow the Northern government by doing this. Booth was able to kill Lincoln, but Seward and Johnson survived. Lincoln was the first American president to be assassinated.

On April 14, Lincoln went to attend a play with his wife at Ford's Theatre in Washington, D.C..

During the third act of the play, following a line in the play that was the biggest laugh of the night, Lincoln was laughing at this line when he was shot. John Wilkes Booth, a well-known actor and a Confederate spy from Maryland, entered the presidential box and fired a pistol at point-blank range into the back of Lincoln's head, mortally wounding him. Lincoln immediately lost consciousness, but he passed into unconsciousness with laughter and a smile on his face. Katherine M. Evans, a young actress in the play, who was offstage when Lincoln was shot but rushed onstage after Booth's exit stated "I looked and saw President Lincoln unconscious, his head dropping on his breast, his eyes closed, but with a smile still on his face". Lincoln was carried across the street to Petersen House. He was placed diagonally on the bed because his tall frame would not fit normally on the smaller bed. He remained in a coma for nine hours. He died the next morning. As he died his breathing grew quieter, his face more calm. According to some accounts, at his last drawn breath, on the morning after the assassination, he smiled broadly and then expired. Historians, most notably author Lee Davis have emphasized Lincoln's peaceful appearance when and after he died: "It was the first time in four years, probably, that a peaceful expression crossed his face." Assistant Secretary of the Treasury in the Lincoln Administration, Maunsell Bradhurst Field wrote, "I had never seen upon the President's face an expression more genial and pleasing." The President’s secretary, John Hay, saw "a look of unspeakable peace came upon his worn features".

After being on the run for 12 days, Booth was tracked down and found on a farm in Virginia, some 70 miles (110 km) south of Washington. After refusing to surrender to Union troops, Booth was killed by Sergeant Boston Corbett on April 26.

All content from Kiddle encyclopedia articles (including the article images and facts) can be freely used under Attribution-ShareAlike license, unless stated otherwise. Cite this article:
Assassination of Abraham Lincoln Facts for Kids. Kiddle Encyclopedia.