Thomas P. "Boston" Corbett (1832 – presumed dead 1894) was the Union Army soldier who shot and killed Abraham Lincoln's assassin, John Wilkes Booth. He disappeared after 1888 and is believed to have died in Minnesota in 1894, but this is unproven.

Corbett was born in London, England. His family emigrated to New York City in 1839. He eventually took on the trade of a hatter in Troy, New York. There has been speculation that the use of mercury as part of the hatter's trade was the cause of Corbett's later mental problems.

Corbett married, but his wife died in childbirth. Following her death, he moved to Boston, and continued working as a hatter. He became a born-again evangelical Christian and changed his name to Boston. Trying to imitate Jesus, he began to wear his hair very long.

Enlisted in the Union army

Corbett joined the Union army at the outbreak of the American Civil War. He re-enlisted three times and eventually obtained the rank of Sergeant in the 16th New York Cavalry. He was captured by the Confederate Army on June 24, 1864, and was held captive at Andersonville prison. He was eventually exchanged and returned to his unit. He later testified for the prosecution in the trial of the commandant of Andersonville, Captain Henry Wirz. 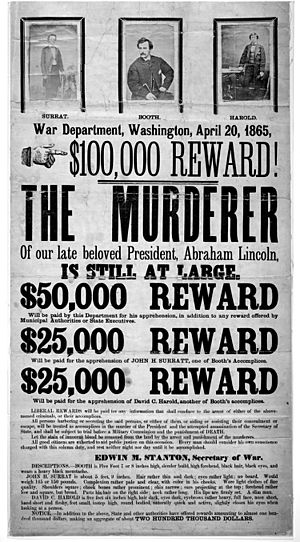 On April 24, 1865, Corbett was one of the cavalrymen sent to pursue John Wilkes Booth, who had assassinated Abraham Lincoln and was still at large. On April 26, they surrounded Booth and his accomplice, David Herold, in a tobacco barn on the Virginia farm of Richard Garrett. The barn was set on fire to try to force them out. Herold surrendered, but Booth remained inside. Corbett was positioned by a large crack in the barn wall. He saw Booth moving about inside and shot him with his Colt revolver despite Secretary of War Stanton's desire that Booth be taken alive. Booth was struck in the neck, the bullet injuring his spinal cord, and he died a few hours later.

Corbett was immediately arrested for disobeying orders, but the charges were later dropped by the Secretary of War, Edwin M. Stanton. Later, Stanton said, "The rebel is dead. The patriot lives." Corbett received his share of the reward money, amounting to $1,653.84.

In his official statement, Corbett claimed he shot Booth because he thought Lincoln's assassin was getting ready to use his weapons. This was denied by other witnesses. When asked later why he did it, he said that "Providence directed me." 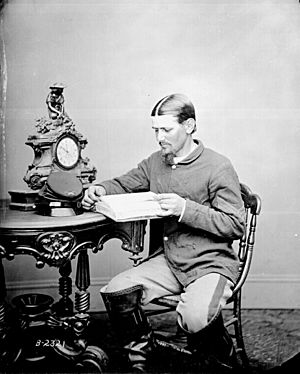 Civilian life after the Union army

Shortly after being discharged from the army, Corbett returned to his trade of being a hatter, first in Boston, and later in Connecticut and New Jersey.

His later life involved increasingly erratic behavior. In 1875, he threatened several men with a pistol at a soldier's reunion in Caldwell, Ohio. In 1878, he moved to Concordia, Kansas, where he lived in a hole dug into a hillside. In 1887, he was appointed assistant doorkeeper of the Kansas House of Representatives in Topeka, Kansas. Overhearing a conversation in which the legislature's opening prayer was mocked, he jumped to his feet and brandished a revolver. No one was hurt but Corbett was arrested, declared insane, and sent to the Topeka Asylum for the Insane. On May 26, 1888, Corbett escaped from the asylum. He went to Neodesha, Kansas, and stayed briefly with Richard Thatcher, a man he had met during his imprisonment at Andersonville in the Civil War. When he left, he said he was heading for Mexico. Corbett possibly settled in the forests near Hinckley, Minnesota and died in the Great Hinckley Fire that took place there on September 1, 1894. There is no definitive proof of his demise, but the name "Thomas Corbett" appears on the list of the dead and missing.

There is a Boston Corbett roadside monument just outside of Concordia, Kansas.

All content from Kiddle encyclopedia articles (including the article images and facts) can be freely used under Attribution-ShareAlike license, unless stated otherwise. Cite this article:
Boston Corbett Facts for Kids. Kiddle Encyclopedia.