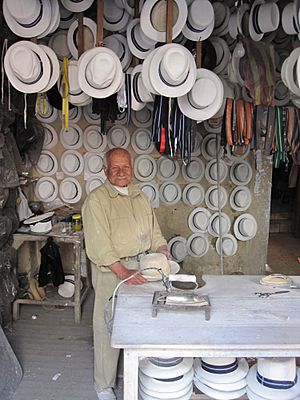 Millinery Department at the Lion Store of Toledo, Ohio, 1900s 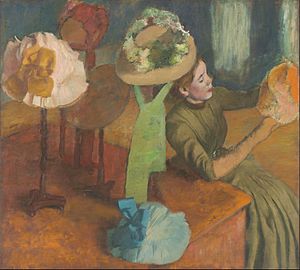 The Millinery Shop by Edgar Degas

Hat-making or millinery is the design, manufacture and sale of hats and head-wear. A person engaged in this trade is called a milliner.

Although some definitions limit the term millinery to women's hats, hats are applied to all human beings, including women, men, and children. Historically, milliners, typically women shopkeepers, produced or imported an inventory of garments for men, women, and children and sold these garments in their millinery shop. Due to the close relationship between headwears and garment, many milliners engaged as both milliner and fashion designer, such as Rose Bertin, Jeanne Lanvin, and Coco Chanel.

The millinery industry benefited by the flourishing industrialization during the nineteenth century. In 1889 in London and Paris, over 8,000 women were employed in millinery, and in 1900 in New York, some 83,000 people, mostly women, were employed in millinery. Though the improvement in commercial trades provided the possibility of advancement and technology to the milliners and the whole industry, essential skills, craftsmanship, and creativity are still required for success. Many of the processes and techniques cannot be replaced by machines nowadays.

The mass-manufacturing of hats, for example, the athletic baseball hats, on the one hand, increased the numbers of hat-wearers, expressed and united the team spirit, and allowed for specific protection. However, on the other hand, it diminished the uniqueness and dynamic provided by a milliner who designs a tailor-made hat for their clients. Therefore, milliner customarily is more often used to describe a person who applies their traditional hand-craftsmanship to design, make, sell, or trim hats primarily for a clientele. At the same time, most of their clients are females.

The term milliner originally from “Milener”, described the merchants who sold the best Milan bonnets, Milan gloves, Milan jewellery, Milan needles, Milan point lace, and Milan ribbons in the renaissance finery. These merchants were native or inhabitants of Milan, in Northern Italian in the early 16th century. Later in the 16th to 18th centuries, the meaning of milliner gradually changed in its definition from a foreigh merchant installing Britain and specialising in fancy accessories to a dealer in small articles appertaining to dress. Although this term's origin is from men, milliner was treated like a woman who makes and sells bonnets and other headgear for women since 1713.

Milliners work independently based on job order specifications or their designs, observing the regulations regarding work safety, health protection, environmental protection, and ensuring quality and efficiency. They combine their uniqueness, innovation, and technical skills and use different materials and auxiliary materials. In some cases, they plan and organize their schedules in cooperation with their customers' various needs. They also collaborate with the team or the apprentice to the presentation and sale of the products.

The millinery industry's apprenticeship culture is commonly seen since the 18th century, while milliner was more like a stylist and created hats or bonnets to go with costumes and chose the laces, trims, and accessories to complete an ensemble piece. Millinery apprentices learned hat-making and styling, running the business, and skills to communicate with customers. Nowadays, this apprenticeship is still a standard process for the students who freshly graduated from the millinery schools. Many well-known milliners experienced this stage. For example, Rose Bertin was an apprentice to a successful milliner Mademoiselle Pagelle before her success.

There are many renowned millinery schools located in Europe, especially in London, Paris, and Italy. During the COVID-19, many millinery courses were taught virtually. For instance, Hat academy is one of the online-based millinery platform providing different millinery deluxe and essential courses via a subscribe system.

In some British post-colonized countries such as Australia, Singapore, and Hong Kong, English is a commonly used language; millinery is well-known craftsmanship and fashionable for special occasions.

The Sasa Ladies' Purse Day Races organized by the Hong Kong Jockey club is an extravagant event with catwalks, games, and competitions offering ladies a chance to wear their millinery. Milliners also will get this opportunity to showcase their millinery collections performed by the celebrities.

Millinery Industry in the 21st century

In the 21st century, taking advantage of the internet and social media, milliners have numerous platforms to showcase and sell their products. Many individual milliners have their website to display their innovative designs and unique craftsmanship for customers worldwide. This marketing approach is not limited to hatters who own a traditional store. For example one of the oldest hatter in London established in 1662, James Lock & Co., operated a well-developed website to showcase their collections.

Due to COVID-19, many workshops or events have been canceled or rescheduled. One of the most significant international events, 'Millinery Meetup' that gathers all professional milliners and mentors worldwide, has to be postponed for one year, and workshops are virtually performed. Another affection brings to the reschedule of the two most enormous occasions for millinery Kentucky Derby and Royal Ascots. However, the millinery party's reformed virtual experience for the Kentucky Derby enhances the people's chance to create and build their DIY paper flower fascinator at home.

On the other hand, in Africa, although most of the millinery is for tribal costumes or mass-manufactured hats for functional and sun protection needs, the colonies' development in the thirteenth century, the dressing and hat styling were influenced a lot by Europeans. After migration, adaptation, and evolution, it is uncommon to see people in Africa wearing a fedora, bowler, cowboy hat, flat cap, and baseball cap, all of which favor America. Nowadays, milliners from South Africa, Mozambique, Nigeria, and Ghana established and developed their business. Epifania Stella Ernesto Gove, the founder of Pifa Gove, is one of the milliners from Mozambique, creates and sells extraordinarily beautiful millinery creations for the special occasion. Her career journey takes the millinery to a new design entrepreneurship level in Africa. 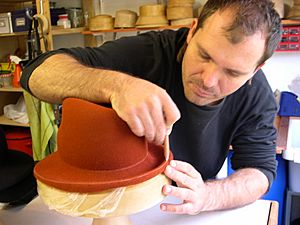 Wooden Hat Block is an intricately carved wood form shaped by skillful woodworkers. Hat blocks are the tools of the trade for milliners in creating a unique hat crown shape. Some of the hat blocks are ensembles with crown and brimmed, while some are only with crown or brim or designed for fascinators. Milliners always have an extensive collection of different hat blocks because there are specific hat sizes and custom shapes for every hat block. In the blocking process of a hat, milliners used push pins and a hammer to hold the adjustable string along the crown's collar and the brim's edge.

Floral making Iron is a unique iron used by milliners to create different floral petals or leaves as the ornament for hat decoration. Candles heat these irons in the past with various shapes of metal in one set. Nowadays, these electric irons are detachable on the metal session and allow for a changeable condition for ironing. A ball-shaped metal heading is commonly used for the curve of floral pastels.

Unique Types of Hats made in the East and West

Many styles of headgear have been popular throughout history and worn for different functions and events. They can be part of uniforms, worn to indicate social status or styled for particular religion occasions.

Straw hats give the main purpose in protecting the head from the sun and keeps cool, various shapes of the straw hats exist around the world for different reasons. A bergère hat is a particular Straw hat which originated in French with a shallow crown and trimmed with ribbon and flowers as decoration. Although the bergère hat has rural simplicity and was known as a milkmaid hat, it was fashionable in the mid -18th century. This hat is common to be seen on the portraits of monarchs such as the portrait for Marie Antoinette painted by Vigee-Leburn in 1783.

The straw hat in Africa came in a multi-functional form, such as from acting as a basket for cropping, shade from the smoldering heat, protection from the rain, and diverts to animals to attract attention, expressing creativity, and showing status. It also worked as a significant cultural symbol in costume for various regional ceremonies, such as the Fulani hat.

In Ancient China, Weimao was one of the most idiosyncratic veiling straw coverings during the Sui and early Tang periods originally used by the nomadic peoples of Central Asia as a protection against the wind and sand blaster. The Weimao was quickly adopted by the women of Sui and Tang China. Their prominence would not only remain in China but would spread to other East Asian cultures as well.

In Japan, this type of straw hat was commonly worn by the noble ladies in the Heian period. They are slightly different from the Weimao, this veil hats are longer with a lengthened to the hips and knees. The purpose of this hat is designed to prevent passer-bys to see the features of the noble ladies. The Japanese version of the Weimao was called Uchikatsugi or more generally as the Ichime gasa. Besides the Ichime gasa, Japanese widely use the straw hat for different personal identification. For example the Kasa used by the low ranking samurai, conical straw hat worn by the monk during their daily practice and Amikasa worn by female dancers during the Awa Odori Festival in the summer.

In South America, Panama hats are famous for their intricate weaving and blocking techniques. However, these hats originated from Ecuador for the invention and production until the late 19th century when the Ecuadorian hat makers emigrated to Panama for better business. Their Panama hats are bestselling for the gold prospectors traveling through Panama to California for the historic California Gold Rush. 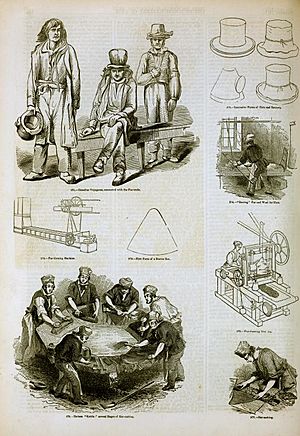 Canada's early fur trade was largely built on the fashion for beaver hats in Europe, particularly top hats. The steps in manufacturing hats are illustrated in this image from 1858.

A great variety of feathers and skins are or formerly were used as decoration or trimmings on women's fashionable hats.

In the early 1900s, feathers, wings, and whole stuffed birds were used as hat trimmings. Plume hunting was so popular that the indiscriminate shooting of birds in search for the snowy egret contributed to the extinction of the Carolina parakeet. Excessive plume hunting like this led to the formation of the Royal Society for the Protection of Birds (RSPB) and the passage of the Lacey Act of 1900.

With references to 1880s newspaper issues, describes trims on fashionable hats as including bird feathers, stuffed birds, and other small animals, fruit, flowers, ribbons, and lace. It described a fashion for stuffed kittens' heads as hat ornaments in or around 1883 in Paris (France), often posed looking out from among foliage and feathers, to the point where some people were reported to breed kittens for the millinery trade.

Bearskin Hats is a tall fur cap, originating from the grenadiers in European armies during the 17th century. The hat is featured with the fur trimmings. After World War I, the bearskins were worn by the Royal guards and armies for specific ceremonials in most of the European countries, such as Britain, Belgium, Denmark, Germany, Sweden, Italy and Russian. Besides military purpose, the bearskin hats were featured in the London Fashion week Spring Summer 2020 by fashion designer Rebecca Shamoon inspired by the Queen’s fashion Guards.

While most of the bearskins are in black colors, the bearskin hat for the Thai royal guard showed a colorful hue in cooperating with their uniforms.

This is a partial list of people who have had a significant influence on hat-making and millinery.

All content from Kiddle encyclopedia articles (including the article images and facts) can be freely used under Attribution-ShareAlike license, unless stated otherwise. Cite this article:
Hatmaking Facts for Kids. Kiddle Encyclopedia.