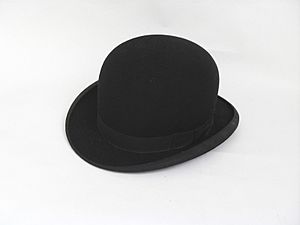 The bowler hat is a hard felt hat with a rounded crown.

It was originally designed to protect the head from blows. One story is that the British soldier and politician Edward Coke, the younger brother of the 2nd Earl of Leicester had it made in 1849. Its purpose was to protect his gamekeepers' heads from low-hanging branches while on horseback. The keepers had previously worn top hats, which were easily knocked off and damaged.

The bowler hat was popular with the working class during the Victorian era, and later on with the middle and upper classes in Britain and the eastern United States. In Britain, they are worn as civilian dress by Guards officers.

Outside the United Kingdom 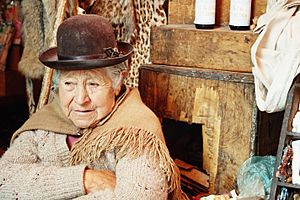 The bowler was the most popular hat in the American Old West. It was "the hat that won the West". Both cowboys and railroad workers preferred the hat because it would not blow off easily in strong wind while riding a horse, or when sticking one's head out the window of a speeding train. It was worn by both lawmen and outlaws, including Bat Masterson, Butch Cassidy, Black Bart, and Billy the Kid. In America the hat came to be commonly known as the derby, and Wild West outlaw Marion Hedgepeth was commonly referred to as "the Derby Kid".

The bowler, called a bombín in Spanish, has been worn by Quechua and Aymara women since the 1920s, when it was introduced to Bolivia by British railway workers. For many years, a factory in Italy manufactured the hats for the Bolivian market, but they are now made locally. Another region where the bowler hat is worn is the Niger Delta area of Nigeria.

The bowler makes regular appearances. It was part of John Steed's outfit in The Avengers British TV series, and Oddjob's favourite weapon in the original Goldfinger film. It was worn by Charlie Chaplin and Stan Laurel in movies.

All content from Kiddle encyclopedia articles (including the article images and facts) can be freely used under Attribution-ShareAlike license, unless stated otherwise. Cite this article:
Bowler hat Facts for Kids. Kiddle Encyclopedia.