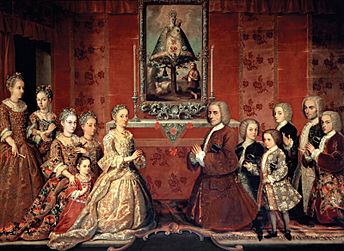 Portrait of the family Fagoga Arozqueta, about 1730. Painter unknown. The family was part of the upper class in Mexico City, New Spain.

Upper class is an idea in sociology. It refers to the group of people at the top of a society. Members of an upper class often have great power over resources and governmental policy in their area.

All content from Kiddle encyclopedia articles (including the article images and facts) can be freely used under Attribution-ShareAlike license, unless stated otherwise. Cite this article:
Upper class Facts for Kids. Kiddle Encyclopedia.