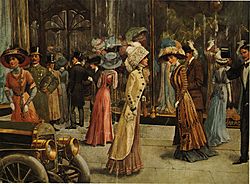 Harrods is an upmarket department store on Brompton Road in Knightsbridge in the Royal Borough of Kensington and Chelsea, London. The Harrods brand also applies to Harrods enterprises, including Harrods Bank, Harrods Estates, Harrods Aviation and Air Harrods.

Harrods was founded by Charles Henry Harrod in 1834. In the 20th century they bought other stores in the UK. In 1959, the British department store holding company, House of Fraser, bought Harrods. Later, in 1985, the Egyptian Mohamed Al-Fayed bought Harrods. In 2010, the store was sold to Qatar Investment Authority (QIA). This company invests the wealth of the Qatar royal family. Harrods is also known for their annual Christmas bears which are very popular.

All content from Kiddle encyclopedia articles (including the article images and facts) can be freely used under Attribution-ShareAlike license, unless stated otherwise. Cite this article:
Harrods Facts for Kids. Kiddle Encyclopedia.