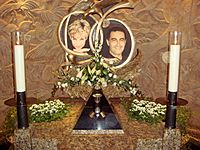 Fayed was the first cousin of the late Washington Post Saudi journalist, Jamal Khashoggi, who was killed in Turkey in 2018.

Fayed was the producer of Chariots of Fire, Breaking Glass, F/X, F/X2, Hook, and The Scarlet Letter.

On August 31, 1997, Fayed was killed in a car crash in Paris with Diana, Princess of Wales, with whom he was in a romantic relationship.

All content from Kiddle encyclopedia articles (including the article images and facts) can be freely used under Attribution-ShareAlike license, unless stated otherwise. Cite this article:
Dodi Fayed Facts for Kids. Kiddle Encyclopedia.