Death of Diana, Princess of Wales facts for kids 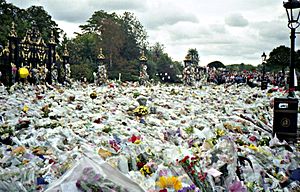 Diana, Princess of Wales and her boyfriend, Dodi Al-Fayed, died in a car crash in Paris, on 31 August 1997. Many people left flowers, candles, cards and personal messages for her in public places.

Diana's death was met with extraordinary public expressions of grief, and her state funeral at Westminster Abbey on 6 September drew an estimated 3 million mourners and onlookers in London, and worldwide television coverage watched by 2.5 billion people. It was aired to 200 countries in 44 languages.

Concerts for Diana took place shortly after her death.

The concerts involved Elton John and many others. Elton John released a new version of his song, "Candle in the Wind," in memory of Diana.

All content from Kiddle encyclopedia articles (including the article images and facts) can be freely used under Attribution-ShareAlike license, unless stated otherwise. Cite this article:
Death of Diana, Princess of Wales Facts for Kids. Kiddle Encyclopedia.