Flag of the United Kingdom facts for kids

Kids Encyclopedia Facts
(Redirected from Union Flag)
For the full history, current status, nomenclature, and its use other than as a flag for the United Kingdom, see Union Jack.

The national flag of the United Kingdom is the Union Jack, also known as the Union Flag.

The flag's standard height-to-length proportions are 1:2. The war flag variant used by the British Army has proportions 3:5.

The earlier flag of Great Britain was established in 1606 by a proclamation of King James VI and I of Scotland and England. The new flag of the United Kingdom was officially created by an Order in Council of 1801, reading as follows:

The Union Flag shall be azure, the Crosses saltire of Saint Andrew and Saint Patrick quarterly per saltire, counter-changed, argent and gules, the latter fimbriated of the second, surmounted by the Cross of Saint George of the third fimbriated as the saltire.

info
Evolution of the Union flag

The Union Flag can be flown by any individual or organisation in Great Britain on any day of their choice. Legal regulations restrict the use of the Union Flag on Government buildings in Northern Ireland. Long-standing restrictions on Government use of the flag elsewhere were abolished in July 2007.

While the flag appears symmetric, the white lines above and below the diagonal red are different widths. On the side closer to the flagpole (or on the left when depicted on paper), the white lines above the diagonals are wider; on the side farther from the flagpole (or on the right when depicted on paper), the converse is true. Thus, no change will be apparent when rotating the flag 180 degrees, but if mirrored the flag will be upside-down.

Placing the flag upside down is considered lèse majesté and is offensive to some. However, it can be flown upside down as a distress signal. While this is rare, it was used by groups under siege during the Boer War and during campaigns in India in the late 18th century.

The Union Flag is flown from Government buildings at half-mast in the following situations:

Until July 2007, the Union Flag was only flown on Government buildings on a limited number of special days each year. The choice of days was managed by the Department for Culture, Media and Sport (DCMS). Government buildings are those used by civil servants, the Crown, or the armed forces. They were not applicable to private citizens, corporations, or local authorities.

On 3 July 2007, the Justice Secretary Jack Straw laid a green paper before Parliament entitled The Governance of Britain. Alongside a range of proposed changes to the constitutional arrangements of the UK was a specific announcement that there would be consultation on whether the rules on flag-flying on Government buildings should be relaxed.

Two days later, Prime Minister Gordon Brown announced that with immediate effect the Union Flag would fly from the flag pole above the front entrance of 10 Downing Street on every day of the year. The intention was to increase feelings of British national identity. Other Government departments were asked to follow this lead, and all Government buildings in Whitehall did so.

James Purnell, Culture Secretary from June 2007 to January 2008 in Brown's administration, subsequently concurred with the abolition of the restrictions – pending consultation on longer term arrangements.

The flag days directed by the DCMS include birthdays of members of the Royal Family, the wedding anniversary of the Monarch, Commonwealth Day, Accession Day, Coronation Day, The Queen's official birthday, Remembrance Sunday and on the days of the State Opening and prorogation of Parliament.

Since 2020, the relevant days have been:

In addition, the flag should be flown in the following areas on the specified days:

In Scotland, the Scottish Government has decreed that the Flag of Scotland ("the Saltire") will fly on all its buildings every day from 8 am until sunset, but there is no specific policy on flying the Union Flag and as such it is sometimes flown alongside the Saltire and sometimes omitted. An exception is made for "national days". On these days, the Saltire shall be lowered and replaced with the Union Flag. These are the same as the flag days noted above with the exception of: 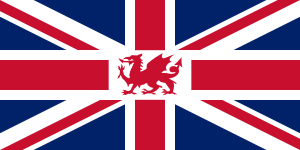 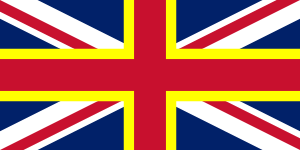 Another suggestion on incorporating Wales into the Union Jack, with the white backdrop on the St George's Cross being replaced with the yellow from the Flag of St David

In November 2007 the then culture minister Margaret Hodge said she would consider a redesign of the Union Flag to incorporate the Welsh dragon, during a debate in the House of Commons on the frequency with which the flag flies above public buildings. The issue was initially raised by Ian Lucas, another Labour MP, who complained that the flag introduced in 1606 following the accession of James VI of Scotland to the English throne as James I combined the cross of St George and the saltire of St Andrew. This principle continued in 1801 when the St Patrick cross was incorporated following the Union with Ireland Act 1800. Lucas claimed the identity of Wales had been suppressed ever since the Laws in Wales Acts 1535–1542. In the debate, Albert Owen MP said that "we in Wales do not feel part of the union flag because the dragon or the cross of St David is not on it." Conservative MP Stewart Jackson described the comments as "eccentric".

In Northern Ireland, the Union Flag is flown from buildings of the Northern Ireland Office as decreed by Regulations published in 2000. The Regulations were amended in 2002 to remove the requirement to fly the flag on the birthdays of Queen Elizabeth, the Queen Mother and Princess Margaret, Countess of Snowdon who both died that year. The current flag days are now the same as the United Kingdom government days noted above with the exception of the Duchess of Cornwall's birthday, which was only added to the UK flag days after her wedding to the Prince of Wales in 2005, and has not yet been extended to Northern Ireland.

The Police Service of Northern Ireland is the only body in the United Kingdom that is not permitted to fly the Union Flag, and is only permitted to fly its service flag or the Royal Standard in the event of a visit by the Sovereign.

As of 2013, numerous proposals were made about how the Union Flag might be altered to create a flag for the union of England, Wales and Northern Ireland after possible Scottish independence. The College of Arms stated that there would be no need to change the flag in those circumstances, and the existing flag could continue to be used if desired. Regarding the removal of Scottish heraldic features from the Union Flag, the Court of the Lord Lyon stated in 2012 that "[that] would be speculation at this stage, and we could only cross that bridge if we came to it."

All content from Kiddle encyclopedia articles (including the article images and facts) can be freely used under Attribution-ShareAlike license, unless stated otherwise. Cite this article:
Flag of the United Kingdom Facts for Kids. Kiddle Encyclopedia.