Prince Andrew, Duke of York, KG, GCVO, CD, ADC(P) (Andrew Albert Christian Edward, born 19 February 1960) is a member of the British royal family. He is the third child and second son of Queen Elizabeth II and Prince Philip, Duke of Edinburgh. At the time of his birth, he was second in the line of succession to the British throne; as of June 2018[update] he is seventh in line.

He holds the rank of commander and the honorary rank of Vice Admiral (as of February 2015) in the Royal Navy, in which he served as an active-duty helicopter pilot and instructor and as the captain of a warship. He saw active service during the Falklands War, flying on multiple missions including anti-surface warfare, Exocet missile decoy, and casualty evacuation.

In 1986, Prince Andrew married Sarah Ferguson; the couple's marriage, subsequent separation and eventual divorce in 1996 attracted a high level of media coverage. As well as carrying out various official engagements, he served as Britain's Special Representative for International Trade and Investment until July 2011.

Prince Andrew was born in the Belgian Suite of Buckingham Palace on 19 February 1960, the third child and second son of Queen Elizabeth II and Prince Philip, Duke of Edinburgh. He was baptised in the Palace's Music Room on 8 April 1960 by the Archbishop of Canterbury, Geoffrey Fisher. He is the namesake of his paternal grandfather, Prince Andrew of Greece and Denmark, who died 16 years before he was born. 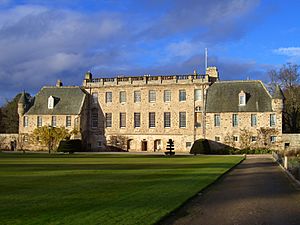 Prince Andrew was the first child born to a reigning monarch since the birth in 1857 of Queen Victoria's youngest child, Princess Beatrice. As with his older siblings, Andrew was looked after by a governess, who was responsible for his early education at Buckingham Palace. He was sent to Heatherdown School near Ascot in Berkshire. In September 1973, he entered Gordonstoun, in northern Scotland, which his father and elder brother had attended before him. While there, he spent six months—from January to June 1977—participating in an exchange programme to Lakefield College School in Canada. He left Gordonstoun in July two years later with A-Levels in English, history, economics, and political science. He did not go to university but instead entered the Britannia Royal Naval College at Dartmouth.

The Royal Household announced in November 1978 that Prince Andrew would join the Royal Navy the following year. In December he underwent various sporting tests and examinations at the Aircrew Selection Centre, at RAF Biggin Hill, along with further tests and interviews at HMS Daedalus, and interviews at the Admiralty Interview Board, HMS Sultan. During March and April 1979, the prince was enrolled at the Royal Naval College Flight, undergoing pilot training, until he was accepted as a trainee helicopter pilot and signed on for 12 years from 11 May 1979. On 1 September of the same year, Prince Andrew was appointed as a midshipman, and entered Britannia Royal Naval College, Dartmouth. During 1980 he also took the Royal Marines All Arms Commando Course.

After passing out from Dartmouth, the prince went on to elementary flying training with the Royal Air Force at RAF Leeming, and later, basic flying training with the navy at HMS Seahawk, where he learned to fly the Gazelle helicopter. After being awarded his wings, he moved onto more advanced training on the Sea King helicopter, and conducted operational flying training until 1982. He joined carrier-based squadron, 820 Naval Air Squadron, serving aboard the aircraft carrier, HMS Invincible.

The Falkland Islands, which are a British overseas territory claimed by Argentina, were invaded by Argentina on 2 April 1982, an event that instigated the Falklands War. Invincible was one of the two operational aircraft carriers available at the time, and, as such, was to play a major role in the Royal Navy task force assembled to sail south to retake the islands.

Prince Andrew's place on board and the possibility of the Queen's son being killed in action made the British Government apprehensive, and the Cabinet desired that Prince Andrew be moved to a desk job for the duration of the conflict. The Queen, though, insisted that her son be allowed to remain with his ship. Prince Andrew remained on board Invincible to serve as a Sea King helicopter co-pilot, flying on missions that included anti-submarine warfare and anti-surface warfare, Exocet missile decoy, casualty evacuation, transport, and search and air rescue. He witnessed the Argentinian attack on the SS Atlantic Conveyor.

At the cessation of the war, Invincible returned to Portsmouth, where the Queen and Prince Philip joined other families of the crew in welcoming the vessel home. The Argentine military government reportedly planned, but did not attempt, to assassinate the prince on Mustique in July 1982. Though he had brief assignments to HMS Illustrious, RNAS Culdrose, and the Joint Services School of Intelligence, Prince Andrew remained with Invincible until 1983. Commander Nigel Ward's memoir, Sea Harrier Over the Falklands, described Prince Andrew as "an excellent pilot and a very promising officer."

Following his return from the Falklands War and until his marriage to Sarah Ferguson, Prince Andrew dated actress Koo Stark. 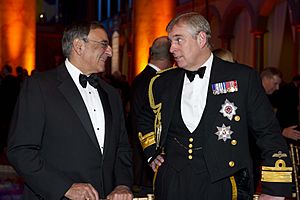 In late 1983, Prince Andrew transferred to RNAS Portland, was trained to fly the Lynx helicopter, and was promoted to the rank of Lieutenant on 1 February 1984, whereupon the Queen appointed him as her personal aide-de-Camp. Prince Andrew served aboard HMS Brazen as a flight pilot until 1986, including deployment to the Mediterranean Sea as part of Standing NRF Maritime Group 2. He undertook the Lieutenants' Greenwich Staff course. On 23 October 1986, the Duke of York (as he was by then) transferred to the General List, enrolled in a four-month helicopter warfare instructor's course at RNAS Yeovilton, and, upon graduation, served from February 1987 to April 1988 as a helicopter warfare officer in 702 Naval Air Squadron, RNAS Portland. He also served on HMS Edinburgh as an Officer of the Watch and Assistant Navigating Officer until 1989, including a six-month deployment as part of exercise Outback 88 to the Far East.

The Duke of York served as flight commander and pilot of the Lynx HAS3 on HMS Campbeltown from 1989 to 1991, during which he also acted as Force Aviation Officer to Standing NRF Maritime Group 1 while the Campbeltown was flagship of the NATO force in the North Atlantic from 1990 to 1991. He passed the squadron command examination on 16 July 1991, attended the Staff College, Camberley, the following year, and completed the Army Staff course. He was promoted to Lieutenant-Commander on 1 February and passed the ship command examination on 12 March 1992. From 1993 to 1994, Prince Andrew commanded the Hunt-class minehunter HMS Cottesmore.

From 1995 to 1996, the Duke was posted as Senior Pilot of 815 Naval Air Squadron, then the largest flying unit in the Fleet Air Arm. His main responsibility was to supervise flying standards and to guarantee an effective operational capability. He was promoted to Commander on 27 April 1999, finishing his active naval career at the British Ministry of Defence in 2001, as an officer of the Diplomatic Directorate of the Naval Staff. In July of that year, the Duke of York was retired from the Active List of the Navy. Three years later, he was made an Honorary Captain, rather than the substantive rank of Captain, as would be customary. On 19 February 2010, his 50th birthday, he was promoted to Honorary Rear Admiral. Five years later, he was promoted to Honorary Vice Admiral.

Prince Andrew married Sarah Ferguson at Westminster Abbey on 23 July 1986. The same day, the Queen created him Duke of York, Earl of Inverness, and Baron Killyleagh, all titles previously held by both his maternal great-grandfather and grandfather. Prince Andrew had known Ferguson since childhood; they had met occasionally at polo matches, and became re-acquainted with each other at Royal Ascot in 1985. 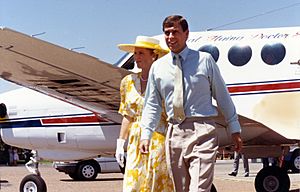 Andrew and Sarah arriving in Queensland, 1988

The couple appeared to have a happy marriage and had two daughters together, presenting a united outward appearance during the late 1980s. His wife's personal qualities were seen as refreshing in the context of the formal protocol surrounding the Royal Family. However, the Duke of York's frequent travel due to his military career, as well as relentless, often critical, media attention focused on the Duchess of York, led to fractures in the marriage. On 19 March 1992, the couple announced plans to separate and did so in an amicable way. The marriage was ended in divorce on 30 May 1996. The Duke of York spoke fondly of his former wife: "We have managed to work together to bring our children up in a way that few others have been able to and I am extremely grateful to be able to do that."

The couple agreed to share custody of their two daughters, and the Duchess continued to live at the Duke's home, Sunninghill Park, until 2004, when he moved to the Royal Lodge.

Prince Andrew's current full style is His Royal Highness The Prince Andrew Albert Christian Edward, Duke of York, Earl of Inverness, Baron Killyleagh, Knight Companion of the Most Noble Order of the Garter, Knight Grand Cross of the Royal Victorian Order, Personal Aide-de-Camp to The Queen.

He holds the following military appointments: 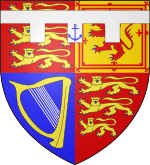 1st and 4th, Gules three Lions passant guardant in pale Or (England). (The first and fourth quarters display the three lions, representing England.)
2nd quarter is of a lion rampant within a Double Tressure floury counterflory Gules (Scotland). (The second quarter, displays a red lion in a yellow field with a double border coloured red, this represents Scotland.)
3rd, Azure a Harp Or stringed Argent (Ireland). (The third quarter shows a harp against a blue background, this represents Ireland.)

The whole differenced by a Label of three points Argent the central point charged with an Anchor Azure. The anchor is in reference to his naval career.

The arms are identical to those his grandfather George VI used when still Duke of York.

All content from Kiddle encyclopedia articles (including the article images and facts) can be freely used under Attribution-ShareAlike license, unless stated otherwise. Cite this article:
Prince Andrew, Duke of York Facts for Kids. Kiddle Encyclopedia.