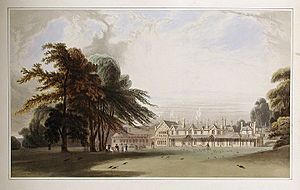 Royal Lodge is a house in Windsor Great Park, half a mile north of Cumberland Lodge and 3 miles south of Windsor Castle. It was the Windsor residence of Queen Elizabeth the Queen Mother from 1952 until her death there in 2002. Since 2004 it has been the official residence of Prince Andrew, Duke of York.

All content from Kiddle encyclopedia articles (including the article images and facts) can be freely used under Attribution-ShareAlike license, unless stated otherwise. Cite this article:
Royal Lodge Facts for Kids. Kiddle Encyclopedia.