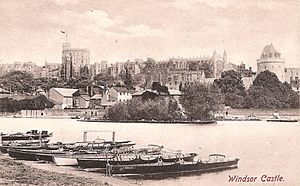 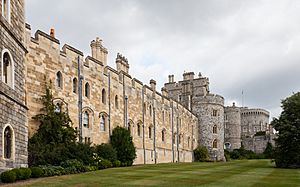 Windsor Castle is the largest inhabited castle in the world. It is in Windsor, Berkshire, England. Queen Elizabeth II of the United Kingdom lives there for part of the year. The castle was built in the 11th century by William the Conqueror as a motte-and-bailey castle for the protection of England; it has been expanded and rebuilt many times. It was a military headquarters during the English Civil War. In 1992, there was a fire at the castle.

Windsor Castle is near the River Thames.

All content from Kiddle encyclopedia articles (including the article images and facts) can be freely used under Attribution-ShareAlike license, unless stated otherwise. Cite this article:
Windsor Castle Facts for Kids. Kiddle Encyclopedia.